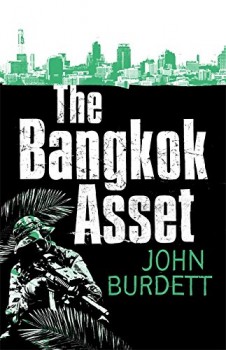 Detective Sonchai Jitpleecheep of the Thai police is called to the scene when a young girl is killed by extraordinary force. A message to Sonchai has been left in blood on the mirror.

Those familiar with the series featuring Detective Sonchai Jitpleecheep of the Thai police will know that Jitpleecheep is the product of a farang (foreign) father he has never met and a Bangkok bargirl, now bar owner. He is bright and one of the few Bangkok detectives who pass up on bribes, but is subject to the whims of his corrupt boss Colonel Vikorn.

Sonchai is called to a scene when a young girl is killed by extraordinary force. A message to Sonchai has been left in blood on the mirror. The night after the strange killing with its peculiarly personal note, Vikorn directs him to attend another location where he meets an attractive young female officer, Krom. Using the latest in surveillance technology during a torrential storm, they watch a westerner direct two men to murder their closest relatives, and then swim through the mighty Chao Phraya River in flood, a superhuman endeavour, with apparent ease.

It is then explained to Sonchai that what he has witnessed is the result of decades of experiment into enhancement of human capabilities for military purposes. A small unit within the CIA, and Russia, have been independently experimenting and both are now competing to sell to China and to convince the buyer that their product is the superior. Sonchai is gradually introduced to the history of developments in the field, and comes to understand the implications for the future of mankind.

As will be evident from the above, this book is more science fiction than crime: the detection is limited to Sonchai’s progress in grasping the enormity of the revelations he witnesses. As with science fiction generally, it is necessary to accept the premise before one can get into the story; unfortunately here the suspension of disbelief required is likely to be beyond that possessed by most readers.

Late in the book we are introduced to one breed of ‘transhumans’ who are strengthened by some form of advanced carbon technology. The more commonly met breed are, however, merely enhanced by mental conditioning, large doses of LSD playing a key role, with ‘apps’ being loaded to give specific powers. This has echoes of the Bourne films, and the Matrix series, and contains ideas perhaps more readily accepted in the faster-moving medium of a film.

Behind the technological wizardry, there is a great deal of preaching about the manipulation of the herd by ‘them’ at the top. Gender equality is said to have led to infantilism and vulnerability to manipulation – ‘when the entire species is stuck at the mental age of thirteen...that’s when they take over’. Quantitative easing is ‘a giant Ponzi scheme’, and human society as we know it is about to collapse.

Sonchai narrates much of the book in the first person, addressing the reader, shortened to ‘R’, from time to time. Unfortunately this intimate note cannot redeem the basic problem with the plot, which is only likely to appeal to fans of dystopian futures.