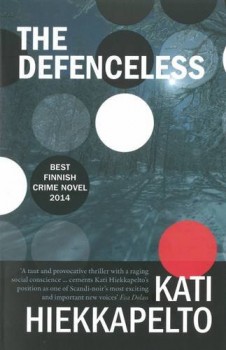 A young Pakistani Christian, who fled to Finland to escape persecution, is denied asylum and gets caught in drugs and gangs warfare. An old man in pyjamas is found dead in the road. Detective Anna Fekete investigates whether there could be a connection between the two.

It’s winter in a small northern Finnish town. Sammy, a young Pakistani Christian, fled his country to escape religious persecution. He is denied asylum, and decides to live rough on the streets, which leads him to getting involved in drugs and gangs warfare.

He’s hooked on heroin and has no prospect of a decent life, but he still has two friends, former Afghan university lecturers, now pizzeria owners. Sammy is cold, hungry and desperate, and comes in contact with police after an unexpected death. His potential ‘freedom’ is jeopardised.

An old man wearing pyjamas is found dead on the road, apparently run over by Hungarian au pair Gabriella. Anna Fekete is called to interview her but becomes suspicious that the accident might not be a clear-cut affair as the evidence points to possible events that might have happened beforehand. Following a thorough search into the life of a dead man, his family and neighbours in a block where he lived, Anna is convinced that the location rather than his actions was the reason for his death. Especially, as two girls come across a bloodied knife in the forest nearby …

Anna Fekete, from the Hungarian minority in the former Yugoslavia, arrived in Finland as a child to escape the war. She is a Finnish citizen, a brilliant police officer yet she’s plagued by constant questions about her own history and her place within the society. Feeling displaced and lonely, Anna is pulled towards the carefree au pair Gabriella so she can speak her language, but at the same time she’s scared of befriending someone who has no idea about trying to adapt to life in a new country.

Her colleague Esko Niemi, openly racist and misogynist, investigates a separate but equally dangerous case of the brutal street gangs arriving in Finland from Sweden and Denmark. Esko is battling with his own mortality, brought on by years of heavy drinking and smoking, and personal unhappiness But as he follows bits of information from his ‘snitch’ he meets Naseem, an educated woman and mother of a gang leader. Although frightened, she seems eager to help police with the investigation. This encounters sends shock waves through Esko’s opinions about people of different ethnic origin. The relationship between Anna and Esko, established in The Hummingbird, develops and grows more complex in the context of immigration and crime, as their views and experiences collide.

Hiekkapelto’s debut The Hummingbird was shortlisted for the Petrona Award for the Best Scandinavian Crime Novel of the Year. The Defenceless was the Best Finnish Crime Novel of 2014, and is already nominated for the Glass Key next year. Without a shadow of a doubt Kati Hiekkapelto has taken a firm place in the Nordic Noir sphere, creating tense, vivid and compelling stories, with strong characterisation, particularly of Anna and Esko, and a very contemporary social commentary.

The novel, in perfect translation by David Hackston, is so beautifully multifaceted that I’m already rereading it. The chilling and utterly believable content would benefit from the deeper analysis but for now I would suggest that you take from it whatever suits you best: excellent thriller, believable characters or a voice of the current state of immigration in Europe.