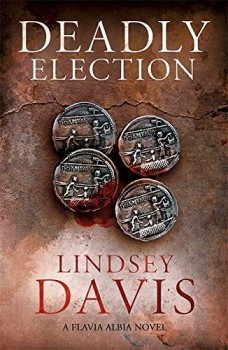 When a body is discovered in a chest at one of Falco’s auctions, his private-eye daughter Flavia Albia uncovers a trail of revenge and hatred set amid the politics of Domitian’s Rome.

They say it’s always more convincing if you write about what you know. Those who have read The Course of Honour, Lindsey Davis’ brilliant life of the Emperor Vespasian, will easily see why her depiction of ancient Rome in 20 stories featuring Marcus Didius Falco and three of Flavia Albia, his adopted British daughter, have been such a success.

But for however clever the plots, however exciting the action, it is Rome, its great roads, magnificent public buildings and filthy back alleys, its sights and smells, which dominates these stories, bringing them to a vibrant life.

It’s not just the city Davis captures so well. Her characters are real, whether principals or supporting, from snooty senators to street vendors, conniving freedmen at the heart of the civil service to bullying vigiles and idle slaves.

Many thought the morally flexible, but charming ex-legionnaire Falco, his determined and brilliant wife, senator’s daughter Helena Justina and his friend Petronius Longinus, rock by name and nature, irreplaceable. But Davis altered the chemistry with their adoption of London street waif Flavia Albia.

Her unconventional upbringing has seen her absorb the dominant traits of both parents. Her status as a young widow gives her a freedom of action far beyond the reach of most Roman women. Her inquiring, often devious mind, cynicism and sense of the ridiculous, her unswerving determination, whether it be to solving a case or hooking her man, makes her not just unique as a woman following a male profession in an unashamedly man’s world, but also allows Davis to introduce new and exclusively female problems.

Frankly, the convoluted plot, revolving around revenge and the internecine nature of Roman politics, is one of the weakest I can remember in this ongoing family saga. But the whole book is such a compelling portrayal, it hardly matters.

To say more would be to wreck what is often an outright funny, and as always cleverly paced and beautifully written story. Plenty of ‘return’ characters provide context as well playing key parts, particularly the aedile (magistrate) Manlius Faustus – possibly the last chaste and upright man in Rome.

All human life is there with the brooding shadow of the Emperor, Vespasian’s brutal and inconsistent second son, Domitian, who has interesting ways of terminating political careers, hanging over it all.

If you haven’t been introduced to the Falcos before, read this. You’ll soon see why Davis is the undisputed queen of the toga ’tecs, become as big a fan as I am – and probably start ploughing through her back catalogue!