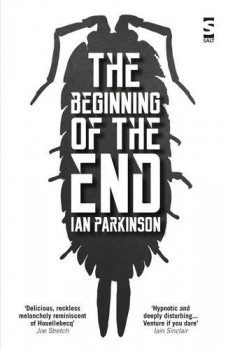 The Beginning of the End

Raymond Verleaux’s story is told in the first person, and it becomes immediately clear that Raymond is very odd. He’s intelligent and educated, but seemingly lacking the ability to connect with the feelings of others. His experience of the world is curiously detached, with rare eruptions of emotion only indirectly related to what is happening around him.

After a few brief sexual encounters with other couples, Raymond retreats alone to the villa, a property under threat from the sea, with a room full of boxes containing random objects from his father’s life. The rapid deterioration of the property mirrors his own dissolution: further retreat from human contact, abuse of prescription medications, and increasing dysfunctionality.

This is a disquieting read. Raymond’s thoughts reflect a uniformly flat rendition of his experience, giving the same low emotional intensity to the suicide of a neighbour, visits from a would-be electricity provider, or sexually explicit exchanges on the internet. It is perhaps the latter which is most shocking: the contrast between the detailed clinical depiction of body parts, and the complete lack of any human warmth or empathy in the couplings they make.

At the same time, the story is oddly compelling. The reader is dragged along, appalled by the lack of direction and emptiness of Raymond’s life but fascinated as to how this train will finally run into the buffers. And the portrait of a world simultaneously familiar but yet so alien, rendered in such stark outlines, provokes one to ponder on human interaction, what defines it and what life would be without it.

This is a tremendously impressive first novel, which strikes me as easier to conceive than to carry through without a misstep, which is something Ian Parkinson has surely achieved. The author maintains a focus on small detail which makes the picture utterly convincing.  It is a portrait of deviant behaviour which takes the reader on a ride into psychological depths which few crime novels achieve.