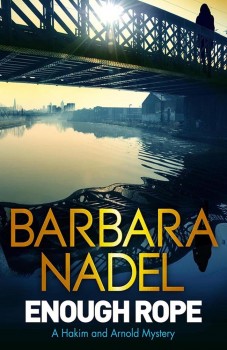 While his assistant investigates the parenthood of a baby once left in a telephone box, ex-copper and PI Lee Arnold helps out a police superintendent whose son has been kidnapped.

In this, their fourth outing, ex-copper Lee Arnold and his assistant Mumtaz Hakim once again display their skills as private investigators in the East End of London.

Lee’s private life is unusually quiescent but his time is fully employed helping out a senior policeman, Superintendent Paul Venus, whose son Harry has been kidnapped. Lee’s help is initially in a private capacity, but when demands for money are escalated, official police assistance is unavoidable, and Lee’s sometime squeeze DI Vi Collins is brought in.

Mumtaz is hired by Alison, rescued by Catholic nuns from a telephone box soon after birth, to find details of her parents. The job is fairly straightforward, and produces startling results. Mumtaz has problems, however: she is still paying blackmail to stop the Sheikh family revealing to her daughter Shazia the part that Mumtaz played in the death of her abusive husband. Shazia is herself suffering from persecution from Naz Sheikh, the most active in the criminal family.

The plot lines are interweaved to a certain extent. Alison’s son turns out to be one of Harry’s elitist chums at the exclusive Reeds school, who are strongly influenced by McCullough, a rather odd master who uses the films of Hitchcock as a teaching aid. Nadel strongly contrasts the values of the school and the parents of the pampered children who attend it with the proletarian ideas and lives of Lee, Vi and the East Enders they mix with.

It is not only the locale which make the Hakim and Arnold series very reminiscent of Eastenders at times. The cultural mix, generational differences and working-class perspective are also very familiar. But most of all it is the propensity for misunderstandings by refusal to talk or act sensibly, some of which stretch credulity.

Nadel creates and sustains the angst by two examples of the above: the refusal of Venus to call in the professionals to tackle the kidnapping, or even to take rational steps to secure Harry’s release, and the inability of Mumtaz and Shazia to talk about their problems. All three parties act so stupidly at times that it is difficult to have patience with them.

As might be imagined, this sort of behaviour does not guarantee happiness, and although the plot is resolved there is plenty of potential for more agonising for all participants in sequels. Nadel always keeps things moving along at a brisk clip, and there is enough in her favoured characters to keep you interested. A bit less silent brooding and mystifying failure to communicate would however be very welcome.