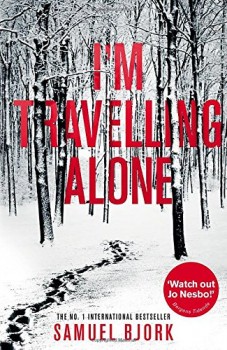 A six-year-old is discovered hanging from a tree in Oslo, with an airline tag ‘I’m travelling alone’ around her neck. Other clues suggest more deaths will follow.

This Scandi crime novel is set in springtime Oslo, so the trees and snow on the cover may be a little misleading, but there is certainly plenty of angst. The death of a child has horrified the city, and one-time Homicide Unit leader Holger Munch has been brought back to get results. Munch is an overweight chain-smoker with a mathematical brain and an addiction to puzzles.

His first thought in mobilising the team is to find Mia Kruger, an intuitive thinker whose insight will be crucial to achieving a breakthrough. This calls for a trip to Hitra, an island off the coast, where Mia is living off alcohol and handfuls of anti-depressants, toying with the idea of suicide: she was unable to prevent the death of her drug-addict sister, Sigrid. It was Mia’s shooting of the man she held responsible for her sister’s death that led to Munch’s exile and Mia’s suspension from duty.

The beautiful but stick-thin Mia is persuaded by the urgency of the case, and puts aside her personal plans to accompany Munch back to the city. Munch has also recruited Gabriel, a computer expert and useful addition to a dedicated team who from now on work night and day to end what quickly becomes a series of murders.

The perpetrator clearly has some agenda: the girls are all the same age, found dressed in specially-made clothes drawn from fairy tales, and kitted out with school bags. He or she also leaves clues to test the detectives, and as time goes on these increasingly seem to have personal implications for Munch and Mia. It takes some time for the principals to become aware that the deaths were triggered by an old event briefly outlined at the beginning of the book.

While the action stays primarily with the pursuers, occasional sections give glimpses of unidentified persons engaged in activities apparently related to the investigation. We are also introduced to a pastor, who runs services popular with old ladies, and Lukas his acolyte, a very odd young man. The pastor has accumulated funds from his congregation to support a cult, operated from a rural settlement out of the city.

I’m Travelling Alone is the first in a series of novels featuring Munch and Kruger and seems to have all the ingredients to make it popular with fans of Scandinavian crime. The contrasting skills of the pair make them a good combination, although Munch’s mathematical brain is not greatly in evidence in this first outing. There are plenty of tight moments, desperate chases and near-misses to keep the reader on the edge of their seat, with disaster looking all too likely up to the final moments.