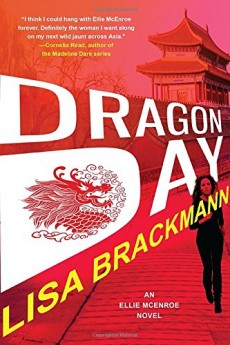 When Ellie McEnroe is asked by Sidney Cao to play detective she can’t say no, but is only too aware that snooping around the rich and powerful of Beijing can be very dangerous.

Ellie McEnroe is a veteran medic from the war in Iraq, with a damaged leg as a souvenir, living in Beijing where she promotes the work of new artists. Since this work is often challenging politically, Ellie’s position with Chinese security agencies can be uncomfortable.

Billionaire Sidney Cao has done her favours in the past, so when he asks her to investigate Marsh Brody, an American who has become close to his son Guwei, she finds it difficult to refuse. But she knows that mixing in the social circle of Guwei and his siblings Meimei and Tiantian comes with risks. These people are used to getting their own way, and command the resources to deal with anyone who looks like being a problem.

Ellie McEnroe represents something new in crime fiction, a young savvy protagonist who moves in a world that an older generation will find difficult to recognise. China’s growth has been so spectacular over the past few decades that the cities are like something out of science fiction: a forest of high rises and six-lane motorways, continuing non-stop development, with a few vestiges of the old China still remaining as a kind of ironic counterpoint.

Within this inhospitable ongoing building binge, capitalist economics Chinese style has produced some startling innovations in the human environment too. Large numbers of the super-rich, and their favoured children boast incomes sufficient to realise dreams both mundane and bizarre, and at the other end of the scale is a vast underclass who struggle to survive on minimal rights. And over it all there is an army of bureaucrats whose overriding preoccupation is keeping the lid on.

Ellie moves about this unfamiliar world with an assurance that you have to admire, especially given her difficulty deciding who she can trust. She has an occasional thing with Creepy John of the Domestic Security Department; not that she has any great confidence, just that he is preferable to Pompadour Bureaucrat with whom she has crossed swords before. The three Cao siblings all have their own agendas and Brody’s motivations are well concealed.

When a waitress disappears from a party hosted by Tiantian it is evident to Ellie that someone in the family is responsible, or at least complicit. Following up she comes across another death, and her own safety seems to be at risk, not to mention that of her mother, with whom she shares her flat, and her mother’s boyfriend. When Sidney offers the latter two protection, Ellie is uncertain whether this is beneficial or merely a threat, and the option of withdrawal from the job is no longer an option.

Ellie is at some pains to demonstrate her cool and this may alienate some readers, but there is a lot about this book to like; the sensation of a society in constant flux underpins the action and makes for great excitement.