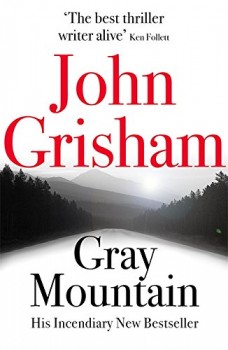 Samantha Kofer is beached in the fall-out from the economic melt-down, and loses a high-pressure job processing financial agreements in the city, with the possible prospect of a return if she spends the intervening period at a non-profit. With few options, she takes a job as an unpaid intern at the Mountain Legal Aid Clinic in Brady, West Virginia.

Brady is located in the heart of the Appalachia: deprivation in the area means plenty of clients, with many facing problems arising from strip-mining, where mountains are crudely levelled to get at the coal. Environmental degradation is colossal, adversely affecting the health of both employees and residents in general.

Sam soon gets to know Donovan Gray, a Brady lawyer who has first-hand experience of unethical behaviour by mining companies, and makes it his mission to make them pay. Since his opponents flout the law, he feels entitled to do the same, and has stolen documents from Krull Mining which prove the company are culpable for damage. The dispute gets very personal, and when Gray is killed in a light aircraft crash many believe it is no accident.

Sam misses her friends and the restaurants in New York, but finds the variety of problems posed by her new clients a welcome challenge. She begins a relationship with Donovan’s brother Jeff, who seeks to draw her into the campaign against the mining companies, and Krull in particular. Sam is torn between the options: take up an offer to return to NY, or stay in Brady and risk her career and life in a battle with powerful and underhand opponents.

John Grisham must be the best-known of all legal thriller writers, and his latest shows that he can still come up with an interesting plot. The mining companies have no moral qualities whatsoever, suborning regulatory and judicial processes to their voracious appetites. Krull even has a Russian owner: these are excellent evildoers against whom to pit your protagonist.

For those who hate lawyers (and let’s face it, who doesn’t?) Sam is not a very likely hero, quite prepared to play the corporate game until she is spat out, and soon pondering a return to NY when she gets an offer. This helps make her believable, however, as does her frank admission of sexual attraction to the Gray brothers without any romantic nonsense, and a sympathetic explanation of the benefits she feels when making a real contribution to the happiness of others.

The book concludes with Sam growing more confident in her own abilities and judgement about how she should proceed to best secure satisfaction at work, rather than any spectacular drama, and the book is rather anti-climactic at the end. As you would expect from a writer with such established credentials, however, this is a very readable tale with plenty of plausible and engaging characters.