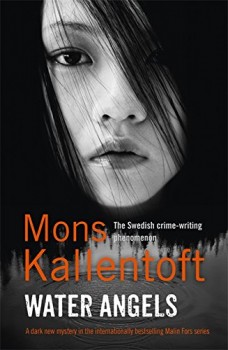 A married couple are found murdered in their home, and their adopted five-year-old daughter has vanished. Inspector Malin Fors, struggling with her own demons, starts to investigate.

Inspector Malin Fors is an alcoholic, not drinking at the moment but constantly struggling to keep sober. She doesn’t admit it but she is hoping to get pregnant again, though she was shot in the womb during an earlier case. Her partner Peter is concerned that her body might not be able to carry a baby. Her relationship with daughter Tove is fraught with difficulties. Confused about future, Malin battles with her past and tends to behave totally unprofessionally under extreme pressure.

But Malin is also an outstanding exceptionally outstanding, committed and extremely hard working. And she is quite obsessive which obviously impacts hugely on her private life but is key in leading the investigation into the disappearance of a young girl Ella and the brutal murder of her parents Patrick and Cecilia.

When the police are called to the scene of the murder of the young couple, who were shot and left to die in a jacuzzi of their suburban home, their first step is to look also for Ella’s body. As it is not found there’s hope that the girl is still alive. From a thorough search into the financial affairs of Patrick and Cecilia, digging into their social background and talking to relatives and colleagues, a picture emerges of a solid honest well-off family.

But then new evidence comes to light and the team realise that Patrick investigated bribery suspicions within the international companies when he had worked in the Far East, and that five-year-old Ella was adopted from Vietnam. However, due to claims of selling children, apparently orphaned, to the paedophile rings, these adoptions have been recently banned in Sweden.

Additionally, Malin’s friend and colleague Karin, a forensics expert, is a mother to a Vietnamese child. Her involvement in the case complicates the professional relationships within the team and new questions are asked. Could there be any connection between adoptions, corruption claims and missing Ella as judging by the evidence the girl could be in grave danger.

Kallentoft creates painfully realistic portrait of a complex personality, a fully developed female character. We might not identify with everything that Malin does but we respect her choices. Malin – mother, dedicated detective, hurting human being – makes the best of her addictive behaviour. The search for Ella and her kidnapper turns into another obsession for Malin who ultimately leads the team into the most heart-breaking conclusion of the case.

The interactions between her colleagues show another interesting aspect of the novel.  Attention is given to each person and so the effect of the unfolding events can be seen on all of them. This also provides different perspectives that move forward the search for the killer and the kidnapper.

The translation by Neil Smith is absolutely superb, flawlessly carrying every nuance and emotion, and allows Kallentoft’s understated yet powerful writing style to shine throughout. Water Angles is not an easy read, with the twin themes of dark obsessions and the grim world of child abduction. In parts the story becomes too unsettling and distressing. But there is also mournful poetry trying to find the balance between good and evil.