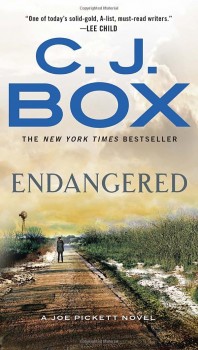 Why no American TV or film company has ever taken on Wyoming game warden Joe Pickett is beyond me. He, his problems and his environment are made for the screen. Cast a younger Eastwood, have the title song written by the late, great, Marty Robbins or Johnny Cash, allow the camera time to linger on the scenery and wildlife of the Bighorn mountains and you’ve got an instant money-spinner for industries which each year spend millions of dollars on total trash!

Pickett is the warden based in the small town of Saddlestring. He is trying to solve the mystery of the slaughter of an entire lek, or flock, of the endangered sage grouse, when news comes through that his adopted daughter has been found, beaten almost to death, beside a country road. He immediately suspects the narcissistic rodeo rider with whom she had run off and his vicious family with whom he has crossed swords before. But the man has a cast-iron alibi.

Meanwhile, the enigmatic loner Nate Romanowski, the ex-special forces falconer who is Pickett’s closest friend, is released from FBI custody to act as bait for his billionaire boss who runs a murder for hire operation. Almost immediately he is ambushed and his girlfriend kidnapped. Romanowski is gravely wounded and winds up in the same emergency hospital as Pickett’s daughter who is in a medically induced coma.

There’s a lot of plot to untangle and Box does it masterfully. Although there are references to earlier cases, the book can easily be read as a standalone. Box has a smooth, yet surprisingly punchy style, with realistic dialogue, cleverly depicted characters and an efficient use of language which gives his books appeal to readers who are not necessarily drawn to a story set in the modern west.

Pickett, his wife Marybeth, and their daughters are a dream American family of the old school, tough, independent, but dedicated to each other, with the parents willing to do whatever it takes to protect their children. Eventually, the baddies get a well-deserved come-uppance – and if the violent denouement all seems a bit rushed, that’s the way it’s always been in the west!

Endangered is a really great all-action read with enough fact to make it realistic and enough action to satisfy the most demanding reader.