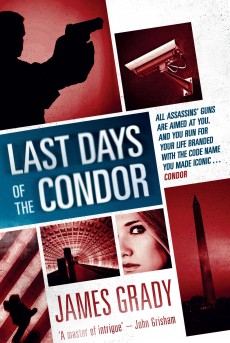 Last Days of the Condor

When the silver-haired spy codenamed Condor arrives home to find another agent skewered to his fireplace, he needs to go on the run to find out who has set him up, and why.

The silver-haired spy codenamed Condor has successfully concluded many covert operations in US and overseas in the past, but age and intermittent memory loss now confine him to a low-profile job in Washington, DC. A day after a routine check on his flat, he returns home to find one of the agents who visited, dead and mutilated. He is convinced this is intended to frame him, and departs only seconds ahead of pursuers intent on his capture or death.

Condor, the consummate professional, is as equipped as he can be to fight. But when the resources of numerous agencies including the police are actively searching for him and monitoring his contacts, he cannot survive for long without allies. He needs to make contact with someone, even if this carries risk. Rendezvous is made, but somehow the meeting has become known to others intent on Condor’s death.

The above sketches just the opening moves of this densely-plotted novel, which is packed with tension and menace from the first page and doesn’t let up. Condor is, as they say, getting too old for this kind of shit, but is the master of smart tradecraft, all the tricks needed to evade 21st century surveillance. His movement around the city is annotated with references to significant sites in the intelligence world, and this adds to the impression that the reader is getting an insider’s view.

It all feels bang up-to-date, as well. The umbrella of Homeland Security now encompasses 16 US agencies apparently (not including those which we don’t even know about). The sheer number of acronyms is impressive, if confusing.  What Condor eventually discovers suggests that government information-gathering, about which we currently hear so much, has the potential for being used in a way even more frightening than merely looking over our shoulder, or leaking our credit card details to fraudsters.

To a certain extent the force of the narrative depends upon a willingness to accept the power of Washington and its institutions at face value, and some of the philosophical nuggets exchanged between Condor and those he gathers around him seem more than a little obscure and cryptic at times. It is, however, easy to believe that innocent persons can be caught up in snafus arising out of the machinations of obscure government agencies, whatever their intentions.

If the title seems familiar, the protagonist is the same as in Grady’s earlier book Six Days of the Condor, later made into a film (Three Days of the Condor). There are similarities: the need for the hero to escape from agencies determined on his death, and the use of innocent civilians as a means of shelter. Unlike his younger self, however, Condor in Last Days has all the skills of a lifetime of covert work, and displays them here to great effect and considerable excitement.