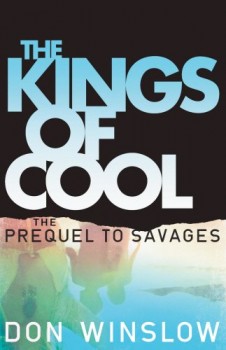 The Kings of Cool

Ben and Chon are two young dudes making a good living out of growing premium grade marijuana, but their success attracts sharks.

Laguna Beach is the brightest pearl in the SoCal necklace stretching from Newport Beach to Mexico, a paradise for surfers and the leading edge for lifestyle trends. In 2005, Ben and Chon are two enterprising young men with a lucrative business growing and selling top-quality marijuana, but someone is putting the bite on.

Ben seeks the cerebral way out, but service-trained Chon is inclined to meet violence with violence. Interleaved with the tale is another story set in Laguna, this one dating from 1967. As the book draws to its violent and bloody conclusion, the links between the generations are made clear and business becomes very personal.

The Kings of Cool has a number of style elements which readers may like or dislike intensely, according to inclination. Winslow varies the lengths of his paragraphs at whim; one comprises only a single word. Sentences are also chopped up on occasion, with odd words given their own line and an initial capital letter. Occasionally he presents a series of two-word lines, giving the appearance of a lurch into poetry. Several times during the course of the book the prose morphs into film script for a page or two. Winslow also has a habit of explaining the derivation of some fairly common words, although this practice mercifully dies out after the first 50 pages. While it is unlikely that his idiosyncrasies will win him any awards, the book remains very readable.

The principal protagonists, Ben, Chon and their lady friend O, are beautiful, smart and cool to a point which rather makes your teeth ache, but are admittedly rather engaging. The central theme of the book is of course the drug scene, from the 1960s to the current day, and readers may have views on this too which would affect their enjoyment. Winslow makes some valid points however about the ‘War on Drugs’ and the impact that public policies have had in transforming large numbers of otherwise law-abiding young people into criminals, and the creation of a massive industry within the US law enforcement and prison systems.

The Kings of Cool is a prequel to Savages, recently made into a film, with the same protagonists and similar subject matter. A book allows for greater space to explore depth of character as well as a variety of subsidiary themes relevant to Laguna lifestyles over a 40-year period, and Winslow makes good use of the opportunities offered. The written form also shelters the audience from the gory realities so realistically portrayed on the big screen, which will be welcomed by the more squeamish.