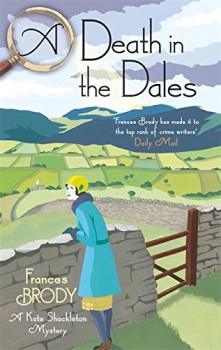 Kate Shackleton grows on you. The war widow, ex-VAD nurse turned investigator is so far removed from the general run of ‘cosy’ heroines, she could stand on her own against any female in modern crime fiction.

As one of that band of largely upper-class girls who nursed at the front, often under appalling conditions in the First War, she is a clever and determined member of a group matured by their experiences. As a capable and self-reliant woman with a bent for detection in a society that still regards her as a second-class citizen, she makes her case with quiet authority.

Frances Brody has her down to a T. Kate is used to the finer things in life: servants, good clothes and nice cars. But her own loss and the visions of hell on the Somme have made her sensitive and sympathetic to the needs of others without a shred of condescension.

In this seventh adventure, Kate’s friend and suitor Lucian Simonson has offered her the use of his late aunt’s house in the Dales. She decides to take her niece for a holiday to help her recover from diphtheria while she takes a break from investigation. She discovers a document left by Lucien’s aunt – the only witness to the killing of a pub landlord – suggesting the man hanged for the murder was innocent.

A close friend of the aunt begs her to investigate and her instincts get the better of her resolution to spend a quiet holiday in a peaceful village. As she delves into the past, she gets caught up in affairs of the present – village life is anything but quiet.

Brody captures the atmosphere of a remote village in the 1920s very well. Undercurrents of envy, gossip, suspicion of ‘incomers’ and unwillingness to talk about past crimes complicate Kate’s investigations, already tangled by a missing boy, a mysterious man, a scandal of past love between widely differing social classes and a suspicious death.

A Death in the Dales is beautifully written, carefully woven, peopled by largely likeable characters with believable conversations in a wonderful landscape and enough dead ends and red herrings to keep you reading – this is another quiet triumph for Brody.

Her pedigree as a playwright and script writer for radio and TV brings a real life and vitality to her writing – even Kate’s lack of culinary skills and her stuttering love life become an integral part of the story – and her portrayal of Harriet, a typical 14-year-old girl with an opinion on everything will strike a real chord with all parents!

Cosy it may be, but this story is also convincing, compelling and clever. If you’re a man who likes an intelligent detective novel, don’t be put off by the label. Once you’ve met Kate Shackleton you’ll want to read more of her!