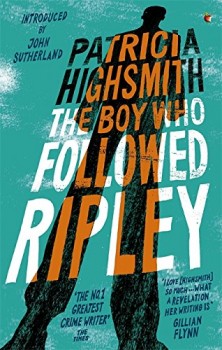 The Boy Who Followed Ripley

Ripley is captivated when a young American arrives at his house in France, but finds the boy has serious problems.

Tom Ripley is living in the village of Villeperce on the outskirts of Paris with his French wife Heloise, in relative financial contentment from his various schemes detailed in earlier parts of Highsmith's Ripliad. A young American shows up and Ripley soon realises he is the 16-year-old son of the wealthy John Pierson, recently deceased.

Ripley takes to the boy, Frank, whose flight from his family seems connected to his father's death. Frank soon admits to Ripley that he killed his father, although the rest of his family do not suspect this. Ripley tries to convince Frank that his action need not blight the rest of his life, Ripley's past life being a convincing argument.

In an attempt to divert Frank, the pair makes a visit to West Berlin, still in the 1980s divided by a wall from the Soviet-dominated East. However, during a visit to the Grunewald, Frank is kidnapped, and a ransom demand is sent to his mother. Ripley decides to play a personal role in Frank's retrieval.

Ripley is an unusual character with a morality which allows him to kill without qualms, so it comes as somewhat of a surprise to find him acting as a good friend to Frank, encouraging him to contact his family and prepared to spend time to help the boy overcome his remorse. Part of this is a rather morbid fascination with Frank's predicament, but it takes quite a long time to overcome the suspicion that Ripley is about to find a way to use Frank for his own personal gain.

In fact, Ripley puts himself at considerable personal risk to rescue Frank, although Ripley being what he is, this is primarily for excitement rather than true affection for the boy. That Ripley makes a success of it seems more like luck than good planning, however.

Some aspects of the kidnap and rescue strike one as being a little odd. The kidnappers are incredibly incompetent, and this is remarked on, but the possibility that Ripley's contacts in Berlin might play a part in the affair seems not to have crossed his mind. Given that Ripley has a dubious reputation with Frank's family, their readiness to rely on his help and to place a $2 million ransom in his hands without even being told his telephone number also stretches credibility.

As with previous Ripley books in the series, the protagonist displays a teasing sexual ambivalence, and relishes the opportunity to dress in drag as part of the rescue effort. He remains a curious mixture of middle-class sophistication and appreciation of the finer things in life, with a particular sensitivity to anything which offends his sensibilities, but a cold and unfeeling attitude to others. Altogether he is a very strange character, and one you would not necessarily want to meet.