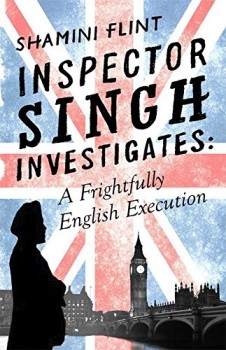 Inspector Singh is posted from Singapore to London to attend a task force on inter-racial policing. Mrs Singh insists on coming along to keep her husband out of trouble.

Inspector Singh has made a number of overseas visits from his Singapore home, most welcome to his superior who finds the overweight curry-loving chain-smoker rather a handful, even if he does have an impressive success rate. Singh has small hopes of enjoying a trip to London, especially when his wife, who maintains a steady rate of personal criticism, declares she will come, if only to catch up with relatives in Southall.

However, on arrival he finds he has been assigned a real case, and although the trail on this murder has gone cold it heats up again in a hurry when a second body is found with the same macabre characteristics. The first victim was Fatima, a girl from a Muslim family, and although the family closed ranks against the police, Singh and his wife have more success in exposing possible motives and culprits.

They discover that Fatima’s family had a partner lined up for her, but that she was not willing, and had a boyfriend without her family’s knowledge. Her boyfriend was two-timing her, and she had challenged her estate agent boss about some dodgy accounting. As if this wasn’t enough, her brother has recently returned from Syria after fighting with a terrorist organisation.

Despite these and additional points of conflict, working out the chain of events proves to be difficult. Another body is found, and a man is taken off the street and executed by jihadis. Singh becomes more personally involved when his wife goes missing. He is convinced her interest in his case has led her to meddle, and that her life may be at risk.  He urgently needs to convince British police that he has cracked the case to get them to take Mrs Singh’s disappearance seriously.

Flint’s Inspector Singh series is a carefully balanced mixture of humour and crime. Singh’s rotundity, appetite and other failings make him a rather ludicrous figure, and waspish criticism from a determinedly parochial wife only adds to the jest. But Singh is capable and determined, and Flint gives him a professional competence which belies the joke.

In this particular outing, the particular nastiness of the several murders and the threat to the keen but foolhardy Mrs Singh does tend to rather outweigh the humour, but in exchange the book benefits from rather more excitement towards the end, a prolonged build-up of tension and a gripping climax. Overall, the feel is not quite as light as some of the earlier adventures, but those who have warmed to the protagonist will find this well up to Flint’s existing high standard.