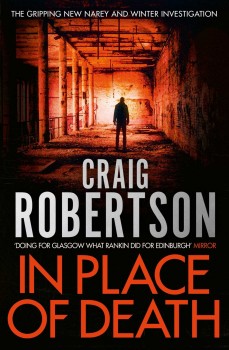 In Place of Death

When an urban explorer finds a murdered man deep beneath the streets of Glasgow, crime scene photographer Tony Winter’s past seem determined to come back to haunt him.

Urban exploring, or urbexing, as it’s known, can be a dangerous hobby, leading enthusiasts into abandoned buildings and deserted places in pursuit of photos or just to be close to the intriguing remains of man-made structures. Glasgow is home to the Molendinar Burn, a mostly culverted waterway flowing beneath the streets of the city on its way to the River Clyde.

When urbexer Remy Feeks ventures into the Molendinar Burn, he’s expecting to have to crawl through some tight spots, but that’s all part of the thrill of his clandestine hobby; what he’s not expecting is to come across a dead and decomposing body wedged into the tunnel. His excited buzz quickly turns to horror and Remy scrambles back out of the burn and makes an anonymous call to the police to report what he’s found.

Crime scene photographer Tony Winter has to go into the Molendinar Burn to photograph the body in situ. A cut throat is a pretty strong indicator that the man didn’t die of natural causes. Winter, whose girlfriend, DS Rachel Narey, has also been assigned to the case, knows rather more about urbexing that he wants to reveal, and starts to follow a lead of his own, unwilling to reveal everything about his past, even to Narey.

This is the first time I’ve come across Craig Robertson’s partnership of Winter and Narey, and the good thing is that they’re a very easy pair to get along with. Narey, like most female cops we meet in fiction, is tough and determined to stand her ground when her boss thinks she’s biting off more than she can chew with what at first appears to be a series of unconnected murders. She quickly becomes convinced there are connections below the surface if someone cares to look, and she sets out to prove the link between a dead woman in a derelict city cinema about to be demolished and the murdered man in the Molendinar Burn before the case is taken off her.

While both of the main characters have plenty of back story, it doesn’t seem to hang like an albatross around their necks, and I was soon caught up in the story without too many of the usual distractions that so often beset crime fiction. Robertson skilfully evokes the lure of deserted, dangerous places, taking me into wrecked buildings and showing their interest and history, and piquing my interest as a caver, making me want to crawl along the hidden waterway in search of its secrets. But I can do without the dead body, thanks very much.

The book trots along at a good pace and demonstrates plenty of punch. Robertson knows his stuff but avoids information dumps, which is always refreshing. The police procedural side comes over as very sound and this was altogether a very convincing story.