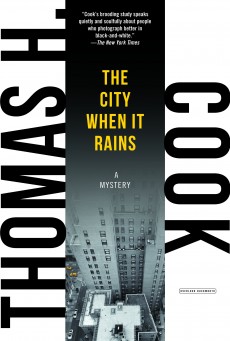 The City When It Rains

Freelance photographer Corman shoots pictures of the scene after a girl falls from a fifth-floor window. He follows up her life story and comes to understand his own life.

Corman gave up teaching for photography, but the photographs he wants to take are not often those which the newspapers will buy. For himself, dedication to his craft is enough, but he has a daughter Lucy to take care of. Lexie, Corman’s ex, has a new rich husband who can provide all the things that Corman cannot, and is angling for custody of their daughter.

On a wet rainy New York night Corman follows police radio to the scene of an apparent suicide. The girl, Sarah Rosen, is very thin and holds a doll in her arms; her sparse living place is full of tins of baby formula. She was white, Jewish and a graduate of Colombia, all unusual enough to warrant remark. On the suggestion of a publisher that a book on the life of the girl might be marketable, Corman follows up leads into her background.

Sarah’s circumstances are slowly revealed over a period of a few days, while Corman’s problems also come to a head. His rent is in arrears and his landlord Trang is threatening to evict him. To fend off Trang and Lexie he needs a steady income, but the only job going is for the society pages, ‘the snoot patrol’, as the reporters dub it. Corman comes to see a parallel between his own problems and those faced by Sarah’s father.

This book is set in a New York that feels older than the year it was written, 1991. The city and the characters within it are viewed in a harsh light very appropriate to the black-and-white medium Corman uses. Cook uses his insights like a scalpel, laying bare the essence of people and situations. Observing the children at Corman’s daughter’s school: ‘The past was a fat man sitting on their chests. A little shake wouldn’t budge him. Potential didn’t raise a sweat. Hope was no more than a buzzing in his ear.’

Corman says little, but we hear enough of his thoughts, and of the reaction of those with whom he interacts, to come to know him well: intelligent and principled, with a stubborn core. Despite the dark side of the truths he sees, he maintains a sense of balance and this is not a depressing book. In fact his eventual understanding of the tragedy of Sarah helps him come to an understanding of his own position and a way to resolve his personal issues in a satisfactory and positive way.

This book is peripheral to the crime genre; there is barely a crime, as such. But in pursuit of the truth, Corman follows the path of the urban sleuth, and his interaction with the police and those concerned with crime makes this familiar territory. It is certainly quality stuff.