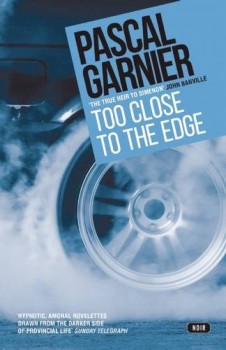 Too Close To The Edge

Eliette is living at the house in the mountains she restored with her husband, but as a widow finds it lonely and is hungry for companionship. The chance visit of some outsiders soon generates plenty of excitement.

Eliette is returning from a visit to her neighbours, Paul and Rose, when her microcar gets a puncture. A stranger on foot comes to her aid; they are both soaked in a rainfall and Eliette invites him in. She is glad of the company, and is happy when Etienne agrees to stay the night, and the two get on very well.

The next day she gets a call from Paul: their son has been killed in a car accident. Paul and Rose are both devastated. Their second son Serge arrives, with his boyfriend Zep, to help, but Serge’s sexual orientation is something Paul cannot cope with. Meanwhile Agnes has arrived at Eliette’s house, and after some confusion is identified as Etienne’s daughter.

In fact Etienne and Agnes had only recently met by chance and started a sexual relationship before they became aware they were father and daughter. The two are petty criminals and are carrying a case of cocaine with a view to sale. Etienne freely confesses his past to Eliette, but she is not disconcerted, and starts planning a future for the pair. Others have plans too, however, and soon things start to slide out of control.

Like Garnier’s other stories, this starts as a domestic tale of everyday folk, lurching without warning into scenes of depravity and weirdness. His message seems to be that in every bourgeois heart there lurks the capability for actions reflecting the darker side of the human psyche. The results are shocking but at the same time very funny, providing you have a rather warped sense of humour.

Part of the joke is the way that the characters you would have thought to be the less susceptible to meltdown become the most deranged. Unhinged by the death of his son and alcoholic indulgence, Paul throws aside a lifetime of nonentity and turns to rape and murder. Eliette turns herself from a quiet old widow to a woman capable of whatever it takes to find a new man and a new life.

Conversely, the ex-jailbird Etienne finds the sudden increase in the pace of events just too much, and is quite incapable of choosing between the competing demands of his rapacious young daughter and the new woman who has come into his life. He is led one way and then another, and you know that things are going to end badly for him.

The translation is excellent: the book reads easily, while the sense of France remains strong. This latter flavour, plus the observation of human behaviour at the margins of deviancy, is reminiscent of Simenon at times. Rarely has noir been so much fun.