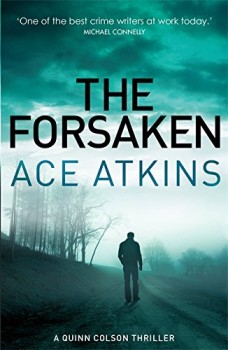 In Jericho, Mississippi, the release from prison of ‘Chains’ LeDoux re-awakens memories of a brutal lynching nearly 40 years ago.

This latest Quinn Colson adventure follows directly from the last in the series - The Broken Places. Jericho is still recovering from the tornado which hit town, and Sheriff Colson and his Deputy Lillie are struggling with accusations that they had some ulterior motive in a shootout which resulted in several deaths.

There is also a resurgence of interest in the events of 1977, when after 17-year-old Diane was raped and her friend murdered, a black vagrant was beaten up and then hanged. Townspeople old enough to remember the incident are reluctant to talk about it, but Diane says her recognition of the different man responsible for the rape weeks after the hanging was hushed up by the then sheriff.

New interest in the matter is partially down to Johnny Stagg, a devious local businessman with lucrative sidelines in prostitution and drugs. Stagg is aware that the leader of the Born Losers motorcycle gang, ‘Chains’ LeDoux, is due for release from prison, and has sworn to come and take Stagg down. Aware that LeDoux was instrumental in the hanging, he is pressing Quinn to take action against him.

As with previous books, the Quinn Colson stories present the best and the worst of rural America. Extremes of climate, infertile soil and few natural resources add up to a difficult life for most, and this inspires the best in the community to rally round in support of those in need. But poor education encourages a tendency to be inward-looking and suspicious, vulnerable to smooth-talkers with their own agenda.

Life in Jericho is thus fairly close to the bone: hard knocks, salty characters with admirable powers of survival but rudimentary personal hygiene, women oppressed and exploited, skulduggery behind every public and private project to the benefit of the few, and money talking very loudly. All this is rendered in authentic-sounding voices and laconic dialogue, with subject matter firmly rooted in the earthy.

‘Chains’ LeDoux and his gang are perhaps less convincing, especially when they seems to have such longevity; a diet heavy in alcohol and drugs and regular set-tos with rivals must do little for life expectancy, and after 40 years the lifestyle calls for extraordinary commitment.

It is interesting to see Atkins portray the large-scale influx of Mexicans into the drug trade in the Southern States, a rather unexpected result of the US War on Drugs in South America. The new fashion for killing your rivals wholesale and displaying the heads for edification makes the Hells Angels look like a bunch of pussies.