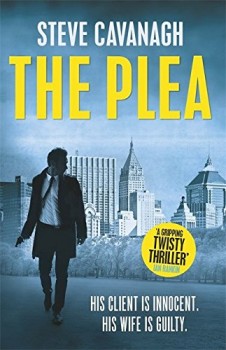 Lawyer Eddie Flynn is given a proposition by the CIA: he has 48 hours to get hired by a man accused of murder and persuade him to plead guilty, or see his wife go to prison for the rest of her life.

Eddie Flynn is a con artist turned lawyer, estranged from his wife who is also a lawyer, for top legal firm Harland and Sinton. Apparently respectable, the firm are actually engaged in money laundering on a major scale, aided by a clever bit of computer software designed by successful website entrepreneur David Child.

Child is currently in police custody after his girlfriend Clara was murdered, and Child found soon after with the gun that killed her. CIA agent Dell needs Child to plead guilty fast, so that he can be pressured to reveal details of the software he has written. His program will deliver billions of dollars to a secret account within 48 hours, and Dell wants to intervene before the money is spirited away.

Flynn’s wife Christine was unwittingly implicated when she witnessed a document on her first day at work, but this provides leverage for Dell to force Flynn to assist. With little option, Flynn gets to work and soon manages to get Child to appoint him as his lawyer. However, he quickly comes to have doubts as to his client’s guilt, and his conscience rebels against joining in a conspiracy to have him convicted.

The action over the next two days is frenetic as Eddie tries to satisfy Dell, free his wife and enable Child to escape the charge against him. Garry Sinton, as the kingpin at Harland and Sinton, has hired thugs to dispose of Child before he talks, and El Grito, hit-man for a Mexican drugs cartel which has cash invested, is also around, torturing and murdering as he thinks necessary. Flynn is under severe pressure to protect the innocent and engineer a solution.

The Plea is a follow-up to Cavanagh’s The Defence, where Eddie also had a race to achieve the impossible, within 24 hours. Here he has a bit longer, and the plot does not feel quite so unreal. I still had some difficulties: it is hard to imagine his wife facing a life sentence for a witness signature, especially on her first day at work, and Child’s algorithm which ‘detects credible threats’ sounds suspect. Also, some startling revelations late on lack surprise for anyone on the lookout for clues.

But there are a couple of nice pieces of courtroom action, where an arrogant and unpleasant DA gets what he deserves, the action is unrelenting, and the book builds to a great climax. Eddie still occasionally resorts to the sleight-of-hand with which he once earned a living, and displays plenty of smarts in and out of court which enables him to stay one move ahead. If you like legal thrillers, this is definitely worth a try.