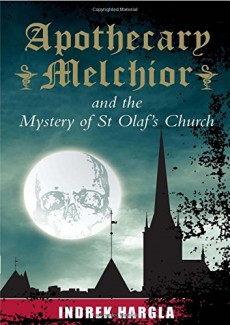 Apothecary Melchior and the Mystery of St Olaf's Church

After a five-day binge, von Clingenstain is the worse for drink and offers little resistance when someone removes his head. The Tallinn magistrate is tasked with apprehending the murderer, and calls in the town apothecary, Melchior, to exercise his skills in detection.

In 1409, the Estonian town of Tallinn is small but growing. The curse of the piratical Victual Brothers has been lifted by the knights of the Teutonic Order, and life has become a little less risky. The attack on ex-Commander von Clingenstain within Toopea Small Castle is thus all the more unexpected. The current Commander, Spanheim, expects the town magistrate to deliver the malefactor for punishment.

The magistrate is uncertain where to start, but enlists the support of Melchior, the town apothecary, who has proved useful in the past in uncovering criminals. His task is complicated when another murder is committed, this time of a master mason engaged on rebuilding the Dominican priory. Further deaths follow; Melchior is persuaded that all the deaths are connected, but it takes a few days before the pattern becomes sufficiently clear for him to announce his suspicions.

Melchior is an agreeable protagonist: friendly to all, and gifted with a degree of insight and freedom from much of the superstition which hampers his contemporaries. Although his story is set some 150 years after Cadfael, the two have much in common, including an encyclopaedic knowledge of herbal remedies and a logical mind. Whereas Cadfael is new to the cloister and the dispensing of medicines, however, Melchior comes from a long family line of apothecaries, and is ambitious to gain reputation and wealth. He is happily married but suffers from a family curse in the form of devastating nightmares.

The author provides a convincing picture of the local centres of power: the knights in the castle, the rich merchants of the town, and the clerics, and the conflicts between them. Tallinn seems somewhat advanced in having a delivery system for water, and not too much is said about waste disposal so the rather pungent aspects of the mediaeval are only lightly touched upon. We do, however, get a taste of everyday life in what is essentially a small village: a trainee lute-player in love with the young wife of an elderly merchant, competition amongst local brewers, and the claims of the ‘blackheads’, forerunners to the masons, to pre-eminence.

Melchior calls for a meeting of the key parties before revealing who did what in traditional whodunit style, to the amazement of the worthies of the town. Sufficient clues are laid to enable readers to formulate informed guesses, while enough is left unclear for the reveal to be satisfying. Readers who enjoy the traditional style, Cadfael fans in particular, should give Hargla a try.