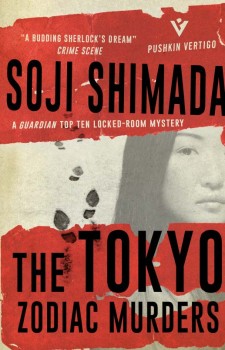 An artist is found murdered in a locked room and a note in his desk gives his plans for the creation of Azoth – a mystical figure - from the bodies of six women. Soon after, the plan is put into effect: six of his daughters and nieces disappear.

This is a mystery story set in Tokyo in 1936, a matter of sensation and curiosity in Japan ever since. Some 40 years later, two friends attempt to solve the riddle. The pair is a little like Holmes and Dr.Watson; Kazumi Ishioka narrates the tale, and his brilliant astrologer friend Kioshi Mitarai ponders the evidence and eventually reveals the true meaning of events.

The strange tale starts with the bludgeoning of Heikichi Umezawa, an artist, in his studio. The building is locked from the inside. In the snow outside the footprints of a man and a woman are visible when the body is discovered. In Umezawa’s desk is an extended note revealing his plans to create Azoth, the perfect woman, from the body parts of six women he will kill. He details his plans to distribute the remains around Japan at specified locations and buried at stated depths in the soil.

Shortly thereafter his projections actually come to pass. First his stepdaughter Kazue is found, also bludgeoned, and then other daughters and nieces disappear. Over the next year their bodies are found in the locations indicated in Umezawa’s note. The police are foxed, but the discovery of two pieces of incriminating evidence in the house of Umezawa’s second wife is sufficient to secure her imprisonment until her death in the 1960s.

Ishioka writes in the first person and having set the scene invites the reader to solve the problem, stating that all the evidence is present to provide a solution. The crime-solving duo follow up the clues, including a new part of the story. This comes from the widow of a policemen, Takegoshi, who leaves a confession that he was enticed to have sex with Kazue on the night of her death, and was subsequently blackmailed to bury the bodies of the six girls according to instructions from an unknown person.

For those who enjoy the whodunit type of crime novel, the Tokyo Zodiac Murders represents a touch of the exotic while at the same time being a fairly straightforward puzzle. For all the noise about the birth signs of the victims, the geographical significance of the places of burial and the supposed skill in astrology of Mitarai, the crime itself has aspects which would be familiar to anyone, and doubtless susceptible to analysis in the normal way.

The book was first published in Japanese in 1981, part of a body of work by Shimada which has brought appreciation from lovers of classical detective fiction, grisly violence and the occult. It is more readily accessible than some Japanese crime, and likely to appeal those who like puzzle-solving.