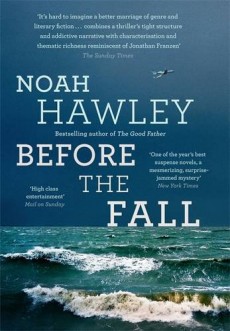 When a private jet goes down, painter Scott and a young boy are the only ones who survive. Several of the passengers had serious enemies – was it sabotage?

Without any warning, a luxury private jet on a short hop from Martha’s Vineyard to New York crashes into the Atlantic. By chance, the only passengers to emerge alive are Scott, a painter, and JJ, a four-year-old. They are miles from land but Scott is a swimmer and heroically brings them both to the shore after hours of effort.

After impact, the aircraft sinks and it is several days before the fuselage and flight recorders can be located. The lack of radio contact from the plane, and the suddenness of the crash, however, encourage speculation about possible sabotage, especially given the reputations of some of those on board.

Foremost among these is the man who chartered the plane, Bateman, who owns ALC, an in-your-face news show. Among those with reason to detest Bateman is Milligan, who hosts the show but has recently been threatened with dismissal for phone hacking. Kipling, another passenger, is a financial manipulator who launders money for various criminal organisations as well as disreputable foreign governments, and is in the sights of the SEC.

As the search for evidence continues, Scott is hounded by the media: a hero, but one whose presence on the jet was not readily explained. Milligan explores various conspiracy theories on TV, many of these to Scott’s detriment. Scott just wants to get on with his painting, and help JJ overcome the trauma of losing his family. Whether he will get the space to do so is questionable.

The book takes the form of short updates in the progress of the crash investigation, and the life of Scott, and brief depictions of Scott’s paintings, punctuated by lengthy outlines of the lives of key persons on the plane. These interruptions to progress in the plot can be frustrating, especially as the subjects are unexceptional and often unsympathetic persons with the ‘problem’ of coping with unexpected wealth.

The structure thus continually shifts from the present to the past, but done well enough to avoid confusion. Hawley also imbues the thinking of his characters with random items of memory from their past, and this is done in an interesting way. However, there is rather too much tell and not enough show to make this really gripping.

I also had some minor gripes: a reference to earth ‘at the heart of the milky way galaxy’ would irritate any astronomer, and the word ‘artisanal’ is used far too many times (not a designer suppository as I initially thought). The rabid press sub-plot is probably realistic but far too common to hold much interest. A pity really, because the opening swim and the final reveal are both done well and generate real excitement.