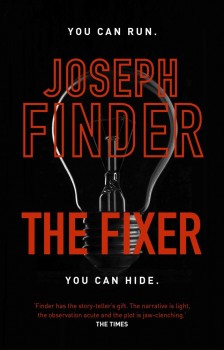 Rick Hoffman’s discovery of a fortune in cash concealed in his father’s old study leads him to an investigation of corruption and a rethink of his own life.

Rick Hoffman is at a low ebb, let go by a glossy magazine for which he covered the antics of the wealthy of Boston, and dumped by his acquisitive girlfriend. Short of funds, he is crashing at the family home, which has fallen into disrepair since his father’s stroke and incarceration in a nursing home some 20 years ago.

Initial steps to check the state of the structure reveal a hidden space containing a very large sum in cash. This leads Rick to investigate how his father - the ‘fixer’ of the title - came to accumulate the pile; a tale which reflects badly not only on his father but also on city officials and major corporations in the city. His questions provoke an immediate and hostile reaction. Taking the cash and keeping quiet would be the sensible option; but could Rick live with himself if he backs off?

As the book starts Rick is less than sympathetic, having abandoned a promising career in meaningful journalism for saccharine but more remunerative work, and makes a fool of himself splurging some of the cash in a vain effort to impress an old girlfriend. Revelations from his investigations help to restore a better sense of priorities, and Rick’s redemption is part of the story. Unfortunately, however, some readers will find this comes too late to make him likeable.

The other difficulty is that the financial machinations engineered by his father, still living but apparently of vastly diminished mental capacity, do not on the face of it appear to make a great deal of sense. In addition, his ex-clients have been generously contributing to the welfare of several parties adversely affected by their activities over the 20 years since, a strange mixture of rapacious indifference to the public good and kind-heartedness which is difficult to reconcile.

The story does provide thrills: the sudden acquisition of a pile of cash is always a good start, and the subsequent revelations about its origin leave plenty of room for skulduggery and risk for the protagonist. Rick changes his lodging and car many times in an attempt to throw off those seeking to dissuade him from continuing his line of investigation. Again, however, the reluctance of Rick’s foes to make him pay the ultimate price for his unwanted enquiries seems difficult to square with their supposed menace.

The tale is certainly is told well enough, with non-stop action. Perhaps I need to work on my suspension of disbelief.