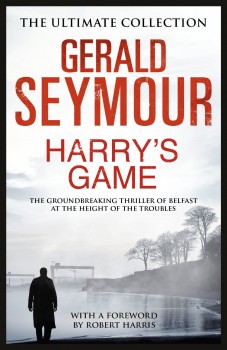 A British cabinet minister is murdered in a London street by an IRA assassin.  The Prime Minister insists that an agent be put in place to find the man responsible.

Whilst the ‘troubles’ are not yet over and even seem to be giving indications of surfacing again, they tend now to be regarded as historical events. When this book was first published in 1978, however, the British army was very much involved in containing the threat posed by the ‘Provos’. It was the first time that the events in Northern Ireland had been the subject of a book of this kind. The thriller, of course, is regarded as an entertainment but there is very little of that in this novel – Gerald Seymour’s first. Instead, there is intolerance, suspicion, violence and fear in abundance. Harry's Game grips, educates, perhaps, but never entertains in the light-hearted sense of that word.

What Seymour does not do is present us with any philosophical or historical reasons for a new outbreak of the troubles in the late 1960s. The deep anti-English feeling in the Catholic population is assumed and we are shown the everyday results of that hatred in the Catholic areas of Belfast. There are stores of broken paving stones to be hurled at the British army vehicles. There are buses hijacked and burnt-out by teenagers anxious to prove themselves as potential hard men. Houses that have been shattered by bombs are the perfect spot for IRA snipers looking to murder soldiers on patrol. All of this in a setting of down-at-heel back to back houses in streets fouled by dog excrement. So effective is the use of detail that the atmosphere is totally authentic and the reader feels like they are walking the streets of the city itself.

Considerable thought has been given to the plot, which involves the efforts, by British army captain Harry Brown, the hunter, to identify and bring to justice his ‘game’, the Provo assassin. The difficulties of planting an agent in the parts of Belfast controlled by the IRA are given in some detail as Harry is briefed for the task and it comes as no surprise to the reader - in fact, it seems almost inevitable - when one of these leads to suspicion of the stranger.

In the Belfast of those days even the slightest suspicion could have fatal consequences and an absorbing and compelling race against time is presented as Harry tries to identify his man before he’s identified by the Provos. The pace never slackens for a moment. Although Harry - perhaps more by luck than investigative skill - is well on the way to locating his man, events occur that place him in danger. These are magnified after the brilliantly-written scene with Josephine in the Sperrins, after which Harry realises that affairs are fast approaching a climax. When that finally arrives it is surprising, exciting and totally believable - a fitting end to an absorbing story.

The problems that face Harry arise partly from the shortage of time available for his briefing, owing to the fact that the Prime Minister wants immediate action in order to demonstrate his determination and strength of purpose. This ‘political’ aspect of the book reflects very badly on those at the very top – the Prime Minister and senior civil servants, in particular. Those a little further down the chain of command and closer, therefore, to the actual events on the ground are portrayed more generously.

Little generosity is extended, however, to the Provos themselves who are shown as having little to hope for. They rant about what they are going to do to the British army but they know at heart that theirs is a losing fight. They no longer have any ideals or dreams of independence and the sole concern of the senior members of the organisation is to continue to be regarded as people of some importance. The prospect of losing face in their own localities is not one that they are prepared to contemplate. The two main characters, however, are Harry and the assassin, and both are portrayed in a very subtle and convincing way.

Plot, characters, historical background – Seymour manages them all perfectly in what has come to be regarded as the thriller par excellence.