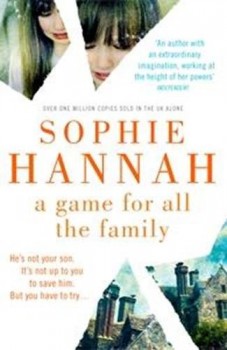 A Game For All The Family

Justine has left her job and moved with her family to a large house in Devon. Once there she begins to receive threatening phone calls from someone who pretends to know her.

Justine has left her job, determined to do nothing at all for the rest of her life. The whole family decide to move to a large house overlooking the estuary at Dartmouth. After a strange incident on the journey down to Devon, Justine begins to receive threatening phone calls from someone who claims to know her and who seems to know all about her.

In addition to this, she notices that her daughter is writing a story for her new school about a murder which apparently took place in their new home. While attempting to understand her daughter’s difficult behaviour and the significance of the story, she discovers that the friend her daughter had made at her new school has disappeared with no explanation. The threats gradually intensify until the whole family are in danger.

The story is told in the voice of Justine and the reader is therefore party to her thoughts and conversations throughout. Whilst this makes for very direct involvement in all the events the effect is different at different stages in the book. At times it can be very compelling as Justine’s anxiety is transferred to the reader. At times it can be difficult to keep up with all her twisted and convoluted thinking, making events appear fast and furious. It can also at times be intensely tedious as being in someone else’s head who appears obsessed with something can be very boring.

Throughout the book the story of another family is told. At one point Justine thinks that this family may have lived at the house previously as they are involved in some disturbing murders in rooms that have features similar to some in their house. This story is told through the medium of stories written for school by the daughter and her friend. Whilst this mechanism works as far as telling the story is concerned, it doesn’t feel realistic for two 14-year-olds to produce prose of this calibre. Indeed one of the stories enables Justine’s own story of her last years at work to be told. As a mechanism for filling in details this is a novel approach but in this instance it did not seem believable at all, coming from the pen of an adolescent boy.

Despite this, the story throughout seems realistic, which of course makes it all the more disturbing. Justine’s struggles to know what to do when placed under pressure seem totally believable and there are some interesting and perceptive comments about family loyalty and about people pretending to be something that they are not. Indeed the merging of fact and fiction so cleverly creates the atmosphere that makes the book so compelling.