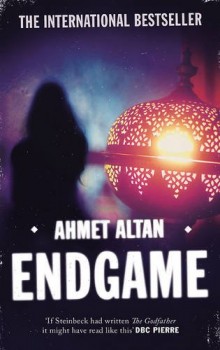 A writer takes a liking to a small town, but discovers that disputes between leading citizens result in a high murder rate. He becomes personally embroiled and eventually becomes involved in murder himself.

On a whim, a writer settles in a small Turkish town, attracted by the beauty of its situation and in particular Zuhal, an attractive woman he meets on arrival. He soon finds that the town is characterised by a high death rate, and is himself witness to the cold-blooded murder by the shooting of a local man by a hit-man brought in for the job.

The deaths result from a long-running struggle for leadership in the town between a small number of families. Key to their dispute is possession of an old ruined church, and the treasure said to be buried in its grounds. The writer comes under suspicion himself, but because of his profession is soon dismissed as harmless, and the principal contenders share their thoughts with him.

He becomes friendliest with Mustafa, mayor and one of the most powerful men in the town. Mustafa, it turns out, has a history with Zuhal and the pair have a torrid love-hate relationship. While Zuhal still dallies with Mustafa, she carries on an intimate affair with the writer by email which soon becomes real. The writer also has sexual liaisons with Sumbul, a prostitute, and Kamile, the wife of Mustafa’s chief enemy Raci.

The dispute soon hots up: Mustafa restricts access to the church and starts excavating, and has Raci’s factories closed for alleged infringement of regulations. In response, Mustafa’s olive groves are set alight. Shootings increase. Eventually the writer himself is drawn into the dispute, and seemingly enmeshed in a plot written by another author, takes a life himself.

I found this book hard going. It explores at length a conceit about God as author, discussing the structure of the novel as God’s construct, God’s intentions, and so on, which even a committed theist may find very wearing. The protagonist’s exultation of sex as sinful suggests the same repressive impetus, and readiness of practically all the women he meets to mate with him strikes one as containing more than a degree of wish-fulfilment.

There is also a great deal about feelings: pages of Zuhal’s random musings on the internet, and the protagonist’s exhaustive pontificating on the minutiae of sentiments relative to love and possession. The author makes declarations about the nature of life, relationships, writers and so on – “A man inhabits two... worlds: he is either a savage or a child.” This kind of thing can be thought-provoking, but a little goes a very long way. Be warned.