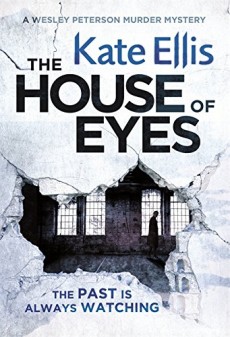 The House of Eyes

Reports of a missing model and the subsequent murder of her father lead DI Wesley Peterson into an investigation which throws suspicion onto many of the residents of the rural Devonshire town. The causes of the crime appear to have historical origins.

This is the 20th instalment of Kate Ellis’s Wesley Peterson series but it is the first that I have read. I will now make it my business to read the first 19.

Leanne Hatman, a young woman aspiring to be a model, has gone missing. Most people who know her assume that she has gone to seek her fortune in London. However, the savage murder of her father leads DI Wesley Peterson to be concerned that Leanne’s disappearance may be more sinister.

The author cleverly interweaves the story of this modern day investigation with the history of a stately home and suggestions of dark deeds of the past haunting the lives of the present. The use of pages from the diary of an 18th century traveller on the grand tour enhance the atmosphere greatly. The characters are believable and well described with enough clues and distractions to make the development of the plot very stimulating. I did not predict the end but it was very satisfying.

The fact that Ellis expects the reader to be familiar with the characters was not in the least off-putting but rather engaged me as a person who is getting to know the community and the characters. The feeling of realism is strong. Kate Ellis manages to describe ordinary life and events in the lives of the characters in such a way that they increase the empathy one develops with the main protagonists. I must admit, however, that I found the invented names of Devonshire towns to be rather distracting. Presumably Tradmouth is Dartmouth across the river from Kingsmear rather than Queensmear! Once I got used to this, however, it no longer detracted from my enjoyment.

I found Ellis’s style of writing to be very accessible, fluent and gripping. The plot was intriguing and I found myself looking forward to being able to pick the book up again and get on with the story. This is definitely a ‘curl up in a chair and indulge yourself with reading’ novel.