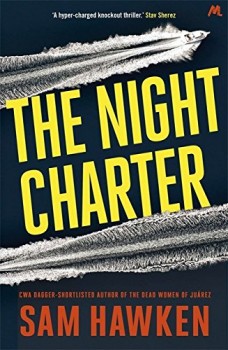 The night charter of a sport fishing boat to bring a Cuban dissident to the USA is the first act in a dangerous and bloody dispute.

Camaro Espinoza, veteran of wars in the Middle East where she served as a medic, is skilled with a range of weaponry, keeps fit, and knows how to take care of herself. When Parker Story agrees to charter her boat so a few friends can do some night fishing, she guesses that there is more to it, but he’s cute, she feels a little sorry for him and, against her better judgement, agrees.

It turns out the real purpose of the trip is passage from Cuba to Miami for Chapado, an irritant to the Cuban authorities, funded by Alpha 66, a long-established Castro opposition group. The charter is completed satisfactorily, but complications ensue when Clifford, leader of the gang contracted to extract Chapado, decides delivery should be worth double the agreed amount.

Things suddenly get very complicated. To reinforce his demands, Clifford shoots a couple of Alpha 66 members at the agreed handover, and the group tool up for the next rendezvous. A representative of the Cuban Intelligence Directorate arrives in Miami to see that Chapado is prevented from generating publicity embarrassing to his bosses. Story fears he is in over his head, and makes Camaro agree that if anything happens to him, she will protect his 14-year-old daughter, Lauren. It is not long before Camaro is called upon to make good on her promise.

Camaro is a cool character, and shows herself to be independent, tough and equal to the bad guys she takes out. Also, her abilities are within the bounds of credibility, not something that you can always rely on with Jack Reacher.

The problem lies really with the plot. Not wishing to spoil the suspense means I can’t say too much. But when you have a strong likelihood of two armed groups coming into conflict, your advice to the single participant who you think deserves consideration would surely be to keep away, for a start.

Maybe this is over-complicating the thing. This is a work of fiction, an entertainment, after all. Little of the crime literature we review would stand up to a stringent reality test, and we don’t necessarily expect it to. But you do look for some logic, and when the author has taken such trouble to create a thoughtful, moral and expert protagonist, it seems such a waste.