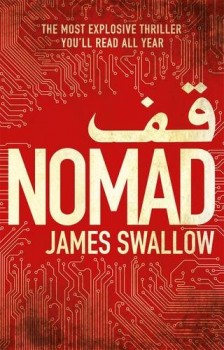 When a devastating attack takes out an M16 clandestine ops team, suspicion falls on Marc Dane, the sole survivor.

Marc Dane is an M16 field agent, but he’s usually at one remove from the action, safe behind a computer screen. His job is to feed valuable information to the men and women at the sharp end, often involved in clandestine missions, operating where they’ve no right to be – on this occasion on a cargo ship in the port at Dunkirk.

In the wake of a devastating terrorist attack in Barcelona, the team, codenamed Nomad, are on the trail of both the possible perpetrators and a weapons shipment. But things go badly wrong when the tactical team come under direct attack and are wiped out, including Samantha Green, a woman who meant more to Dane than just someone he worked with. She dies in his arms, after telling Dane her suspicions that someone in M16 is working for the very people Nomad have been targeting.

As the sole survivor of the attack, suspicion turns quickly on Dane, and he finds himself being hunted by his own employers, who don’t seem inclined to listen to his side of things.

Nomad ticks all the boxes for me. I’m a sucker for characters up to their eyes in trouble, not knowing who to trust, and chase thrillers always appeal. There’s a low score on helicopters being shot down, but a very high score when it comes to realistic detail, sharp characterisation and some very entertaining thrills and spills. Marc Dane is no James Bond, but his escapes are all well within the bounds of possibility, although I’m not qualified to comment on how plausible his takedown of a military drone was, but it certainly made up for not being able to play the helicopter drinking game!

The action careers around the globe as two shadowy organisations – the Combine and the Rubicon group – go head to head, with Marc Dane the prize they’re both vying for. Dane ends up having to work with ex-Delta Force sniper Lucy Keyes, a woman who plays her cards very close to her chest. Combine are definitely the bad guys, but with Rubicon, shades of grey are the order of the day.

Dane is a strong enough character to carry a long, intense story. He’s a reluctant hero, thrust by brutal circumstances into the frontline role he deliberately turned his back on in favour of a more technical and backroom role. But he’s tough and smart, and that’s a combination that goes a long way in any thriller. In the early stages, the frequent scene changes made it slightly hard for me to keep the whole picture in my head and as a result it took a while for the book to really hit its stride, but when it did, the breakneck action dragged me through the story with no let-up.

The climax, as Dane and Keyes fight to prevent an ingenious and deeply unpleasant attack from taking place right in the heart of New York, was one that became genuinely impossible to put down. Nomad is a fast-paced, tautly written thriller with an extremely engaging main character who can both think and shoot his way out of trouble.