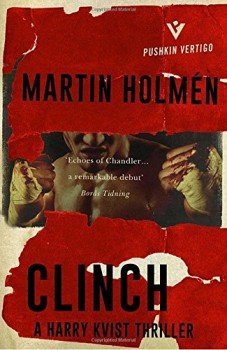 In 1930s Stockholm, ex-boxer Harry Kvist makes a routine call to collect a debt, and when the man is found dead a few hours later the police have Harry in the frame. Harry sets out to find the real murderer, and clear himself.

Harry Kvist makes a living re-possessing bicycles or collecting on debts, where his pugilistic skills and cynical understanding of human nature can earn him a few kroner. Following instructions received in a letter, he makes a call on a man, Zetterberg, and with a mild beating, promises to be back in a day to collect what is said to be owing on the purchase of a car.

When Zetterberg is killed later that same night, the police arrive at Harry’s door; a fracas ensues and Harry is taken to Headquarters for a grilling. The police eventually let Harry go, although unconvinced by his protestations of innocence. Spurred by the threat of re-arrest and by pride in his abilities, Harry sets out to find a prostitute who was present at the scene and can give him an alibi.

Unfortunately he knows little about the girl other than that she is bowlegged and has a dales accent. However, Harry is familiar with the places a poor girl can hang out, and soon catches wind of her movements, although for a time too late to apprehend her. In his peregrinations about the city he also senses a shadow, someone else searching for the girl.

The trail goes temporarily cold, and Harry is distracted by the arrival of Doris Steiner, a well-known actress married to a rich industrialist. Doris takes a fancy to Harry’s charms, and despite Harry’s preference for partners of the same sex he is happy to satisfy Doris, especially when it means being wined and dined at the best places in town. When he gets a lead on the girl he has been seeking, however, he loses no time in following up, which precipitates a conclusion to the mystery of Zetterberg’s death.

What marks this book out as unusual is the nature of the protagonist, and the specifics of the setting. Harry was orphaned, spent several years at sea and for a few years boxed very successfully. He is as tough as they come, with a face well decorated with scars and knuckles full of partially-healed fractures. Violence permeates his everyday life, even his sexual encounters, and it is some time before the author lets us see even a glimpse of anything other than brutality in his nature.

The city that Harry sees around him is very much at one with Harry himself: dirty, violent and cruel, with sickness and pain ever in plain sight. The depictions of the city are partially lost in translation, but enough is evident to sympathise with the residents, even as you shudder at the fleas, lice and crabs which infest them. It all feels very convincing. This is the first Harry Kvist thriller in what is said to be a trilogy, and I look forward hungrily to the next.