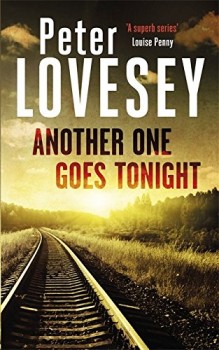 Another One Goes Tonight

DS Peter Diamond arrives at the scene of a police car accident to discover an extra unconscious victim nearby and administers CPR. While the injured man lingers on life support Diamond’s enquiries lead him to believe he may have saved the life of a serial killer.

DS Peter Diamond of Bath Police murder squad is none too happy when he is ordered to lead a Professional Standards enquiry into a late night police car accident. At the scene where one policeman is dead and another seriously injured Diamond finds another unnoticed victim thrown onto an embankment.

The DS administers CPR to the man who is later identified as a well-known local eccentric and railway enthusiast Ivor Pellegrini. As Pellegrini lingers unconscious in hospital Diamond’s enquiries unearth evidence that the old man is involved in a series of un-investigated deaths. Diamond begins an off-the-record investigation with his team, but with the only suspect in a coma and the principal witnesses dead this is going to be a tricky case.

This is the 16th book in the Peter Diamond series. Unlike his previous cases this investigation becomes personal, something he normally avoids, but because he saved the accident victim’s life his approach changes. His usual methods for solving crimes involve simply gathering clues, making deductions, interviewing witnesses and evaluating evidence. In this case, however, he finds that against his better judgement he also starts to rely on hunches and intuition.

In Diamond Lovesey has created a hard-bitten detective with a sharp brain (which always helps), who is a widower (his wife was shot dead), who is out of condition (too much coffee and fried food), who still has problems when working in a team (despite his experience) and who has issues with authority figures (particularly his boss).

Another One Goes Tonight features a well-paced and engrossing plot. Lovesey has Diamond, together with vital members of his team, having to deal with what turns out to be a cunning series of crimes. He makes full use of locations in Bath and local environs to create his crime scenes and to set enquiries and confrontations. His featured villains are as credible and interesting as his law officers – a match for each other in terms of wit and scheming.

With so many crime novels under his belt Lovesey is still at the top of his game as a writer – this is as tidy and satisfying a read as any of his others and can be read alone or as part of the series. However, if Diamond isn’t to be retired Lovesey may again need to give us a few surprises in his next case that will reveal and develop another side of the character of this old friend to keep us enthralled by him.