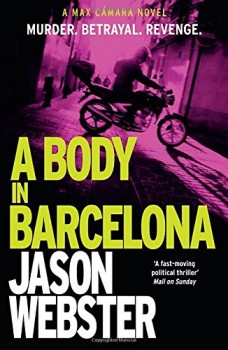 A Body in Barcelona

Detective Max Camera is assigned to the murder of a boy, son of a supermarket magnate. He receives information from a source high-up in a government intelligence agency, but is he being manipulated?

This is the fifth outing for Max Camera, the Valencia detective with anarchist sympathies acquired from his grandfather Hilario. As the book starts he is in Barcelona, looking into the death of a man at a rally for Catalan independence, and is the only one of a police investigation team who finds the death at police hands less than totally justified.

Back in Valencia, he is instructed to take over the investigation into the death of a ten-year-old boy, the illegitimate son of Segarra, the fourth-richest man in Spain. Progress is elusive until Camera is contacted by ‘Carlos’ who offers details of Segarra’s links to a right-wing ex-military organisation, in exchange for information about Camera’s anarchist friends.

With the benefit of information supplied, Camera flies to the Spanish Moroccan enclave of Ceuta to arrest Colonel Terreros who, with money supplied until recently by Segarra, has been running clandestine military operations for rightist political elements. Camera comes to wonder, however, whether he is merely being manoeuvred into playing a part in a wider scheme, for motives that are unclear.

As usual, Camera’s activities are played out against the backdrop of the big issues in Spain, here the pressure in Catalonia for independence, and the scheming of the rich and powerful, including the military, to restore Franco-style ‘traditional values’. While democracy is apparently firmly established, the experiences of the civil war and its aftermath are still very raw, and violence bubbles below the surface.

The conflict is well articulated through Webster’s portrayal of Camera, who as ever is uncomfortable with his role as an agent of social control and happiest with his friends who run a shelter for the poorest in society, notwithstanding their suspicion. As his expertise as a detective gains recognition, however, he is becoming co-opted by those with influence, giving rise to jealousy and distrust from his colleagues. All this means that Camera spends much of the time in an unhappy frame of mind, compounded by difficulties with his girlfriend Alicia, who is unable to get over the psychological effect of the kidnapping and torture she suffered in Blood Med.

Against the slow pace of Camera’s progress in the first half of the book, we are privy to Terreros’s communications with an agent which alerts the reader that a major operation is going down. The identity of this agent is unclear until the final stages, where the elements are brought together in a dramatic conclusion at one of Barcelona’s best-known tourist attractions. This series continues to improve.