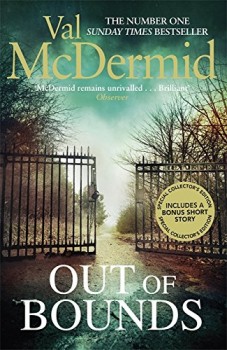 A DNA test done on a teenage car thief throws up an unexpected connection to a case of rape and murder 22 years ago.

In her 30th book, the undoubted Queen of Crime, Val McDermid, returns to a relatively recent creation, DCI Karen Pirie, head of Police Scotland’s Historic Case Unit. As Pirie would be the first to admit, the truth is slightly less grand than the title might suggest. The other half of the team is hapless DC Jason ‘The Mint’ Murray, to whom the phrase ‘couldn’t find his own arse with both hands and a roadmap’ could easily be applied.

In Out of Bounds, DNA from a teenage car thief, Ross Garvie, now in a coma after the crash that killed three of his friends, comes up as a close match for DNA from a historic case of rape and murder. What at first looks like an easy win rapidly turns complicated when Pirie learns that Garvie was adopted, and his adoptive parents vow to fight any attempts to uncover the identity of his birth parents.

At the same time as pursuing justice for murdered hairdresser Tina McDonald, Pirie also becomes intrigued with a more recent case of a man found dead by a dog-walker. The investigating officer is, in Pirie’s opinion, lazy enough to just want to write the case off as suicide, but Pirie is less certain. When digging into the man’s background, she discovers links to cold case from the 1970s when a light aircraft crashed, killing the man’s parents and the other occupants of the plane. As a high-profile MP was on board, the incident was put down to terrorist action, even though no group ever claimed responsibility for it.

Karen Pirie has never been one to keep her nose out of other people’s business and that certainly doesn’t endear her to several of her colleagues and superior officers. She has a stubborn and endearing disregard for authority, and is a past mistress of the art of wriggling out of difficult situations relatively unscathed. Despite her hard-boiled exterior, Pirie is still struggling to come to terms with the recent loss of her partner, also a police officer, killed in the line of duty. Pirie has taken to a routine of solitary, nocturnal walks around the city. One of these brings her into contact with a group of Syrian refugees, struggling to come to terms with a life away from their war-torn homeland. To her surprise, Pirie opens up more to these men that she has done with anyone since her bereavement.

Out of Bounds establishes DCI Karen Pirie as a strong, well-rounded lead character. She has a huge amount of empathy for the long-dead victims and boundless determination to see they get the justice they deserve. The various individual plot strands come together well, with McDermid’s trademark flair. The book builds on the firm foundations laid for her in The Skeleton Road and the theme of cold cases will no doubt provide a rich seam to be mined for future books.

Val MCDermid’s habit of never focussing on one main character for too long in a run of books keeps her work fresh – and, by her own admission, stops her getting bored with her own creations. What works for her as a writer certainly works for me as a reader, and I was very happy to raise a glass to the prospect of her next 30 books!