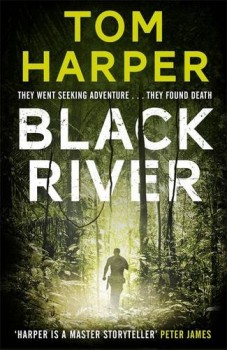 A lost city. The world's deadliest jungle. When your life depends on it, who can you really trust?

Kel MacDonald is a doctor on holiday with his wife and baby daughter, trying to have an adventure in Mexico. He takes a dangerous dive on his own, and needs rescuing by the charismatic Anton. He latches on to Anton and Drew, adventurous free spirits he yearns to emulate. Over a thank-you dinner, he learns they are looking for treasure of a lost city, and they learn he is a medical doctor. Five weeks later, Kel is joining their team expedition in Peru.

After a shocking start to the trip – collecting guns and the cook being murdered – their boat heads off down the river. There's death and disaster at every turn as they hunt down Paititi, the lost city. The motives of each team member conflict, and when they finally find what they are looking for, it seems like Kel might not make it home alive.

Kel feels like such an unlikeable character from the beginning. His recklessness in the presence of his young family doesn't endear, and his feelings and flirting towards Drew stray well into inappropriate. He's like a child, wanting adventure, but completely unprepared and selfish.

Despite the events of the early expedition, the pace of the book felt slow and disjointed. It didn't hold attention, and in consequence the multiple threads of the tale didn't weave well.

Somewhere about the mid-point of the book, however, things seemed to fall into place. All the members of the team slipped more sharply into focus, and the drama of the chase for treasure came alive as the danger soared.

With the final escape down river and revelation about which team member was sabotaging the expedition, the book became unputdownable. Kel redeems his reputation of family loyalty, and the twist in the tale is a blindsider. A slow start turned into an excellent read.