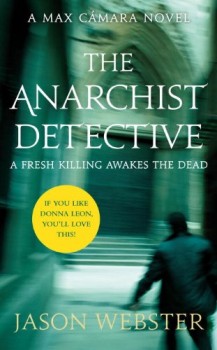 Max Camera returns to his boyhood home in Albacete when his grandfather, who brought him up, has a stroke. Camera is on extended leave from his job as a detective in Valencia, but he is quickly drawn in to cases with connections to the past. A young girl is raped and murdered, her body found close to where his sister was dumped after a similar fate some 30 years ago.

A dig is being made for bodies of murdered opponents to Franco’s regime, of which Camera’s great-grandfather was one. And Yago, a childhood friend now head of the local police, solicits his help with an investigation of the local saffron industry: organised crime is suspected and there are worries about police corruption. Camera shifts into detective mode, but as he learns more about his past, he comes to a better realisation of how he came to be who he is, and what he wants for the future.

There is much to like about The Anarchist Detective. Camera himself has depth and the increase in self-understanding during the book is well conveyed. Part of this process is down to his grandfather, Hilario, a principled, stubborn and reserved old man and a very engaging character. The sub-plot about the Spanish Civil War and its aftermath brings alive aspects of that terrible conflict, some of which still impinge on life in Spain today. The story about saffron is also interesting, although possibly not entirely surprising.

Readers who are squeamish about dead bodies will also appreciate the lack of forensic description, depiction of victims’ body parts, and so on. While there is no doubt an appetite for this sort of thing, it is refreshing to find a crime novel where we are spared the grisly detail. Unfortunately the lack of specificity extends to the solving of the cases under investigation. Without giving too much away, the book ends in a rush, the murder explained following a frankly unbelievable blunder by the perpetrator.

Max Camera has had two previous outings in books that earned praise –one won an award – but on the basis of The Anarchist Detective Jason Webster needs to put a bit more effort into resolving his plots to avoid leaving the reader deflated. This is all the more disappointing when the characters he introduces are so well-drawn. Despite the let-down this is still an interesting read and I expect there will be others also looking forward to the next instalment in the life of Max Camera.