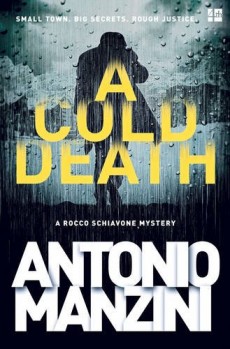 This is the second outing for Deputy Police Chief Rocco Schiavone, a policeman nursing a serious problem with authority who takes the demands of his job as a personal affront. He is exiled from Rome after treading on some political toes, and finds the grey skies and cold of the northern town of Aosta less than congenial, and finds relief in letting everyone know about it.

Schiavone is called to an apartment by a cleaner panicked by evidence of a burglary, and finds a woman hanged. At first sight he assumes suicide, but the theory is put in doubt by evidence at the scene. Suspicion settles on the burglars, and when Schiavone encounters Hilmi, the son of the cleaner’s partner, he has a suspect. Hilmi looks very like someone being sought for assault on police staking out a park where drug dealing has been a source of public complaint.

There is distraction when an old colleague calls seeking help to deal with a repeat rapist. This opens the door to back story about Schiavone’s exile from Rome, engineered by the father of the offender, who is a big political wheel. Schiavone visits Rome and, with the assistance of his criminal friends, exercises summary justice. While he is there he visits the grave of Marina, his former wife, who he still misses badly. Schiavone feels some culpability for her death, but the circumstances remain obscure; full details await a later book.

Schiavone still displays those oddities seen in Black Run: his refusal to acquire more substantial footwear than Clark’s desert boots even when tackling mountain snow, joint-smoking in his office, and his precisely-calibrated hierarchy of pains in the arse for demands on his time. As we come to know him better, however, his behaviour seems rather less random and his skills as a detective easier to appreciate.

He has certainly been quick to assess the capabilities of his staff, making good use of detectives Italo, a young man who copes well with the pressures his boss imposes on him, and Caterina Rispoli, bright as well as attractive. Everyone else in his professional life gets short shrift, and this includes his boss the police chief, the forensic examiner and the local magistrate. Luckily, Schiavone’s ability to wrap up cases just about compensates for his appalling lack of respect for those in charge.

For all its irreverence and humour, Schiavone’s approach to crime solving is really not so strange, and it is not long before he achieves results. On the way, the reader is treated to many small vignettes of small-town Italian life, and a caustic commentary on the foibles of the characters the protagonist has perforce to cope with. Under it all, Manzini makes some serious points without much trouble to the reader.