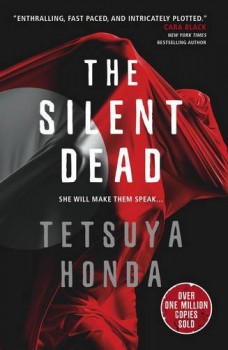 The discovery of a mutilated body wrapped in tarpaulin on a Tokyo park hedge seems at first inexplicable, and it takes a leap of imagination from Lieutenant Himekawa to make progress with the case.

Reiko Himekawa leads a small squad working in Tokyo’s Homicide Division, and is one of dozens of officers assigned when a body marked by torture is found dumped on the periphery of a small local park. It is her insight that a large post-mortem wound was made to assist in concealing the place of intended disposal which helps to expose other corpses, all with similar evidence of abuse.

The reason for the deaths remains obscure, however, and it is only when rumours start to surface of a dark web group named Strawberry Night that Himekawa and her colleagues get a hint of what is going on. Even then progress is difficult, and attempts to penetrate the website prove very costly. Someone close to the investigation is part of the opposition and has strong reasons to consider Himekawa as a suitable subject for elimination.

This book is the first of eight novels and story collections featuring Reiko Himekawa, whose personal background is explored in detail. Inspired by a policewoman killed in the apprehension of a rapist who assaulted the protagonist herself, Himekawa threw herself into a police career. Persistence and exceptional insight have gained her rapid promotion, despite infrequent panic attacks under stress when the circumstances of the assault return to her mind.

Himekawa has great rapport with her team, although subject to prejudice in an overwhelmingly male profession. She is well capable of fending off proposals from some of the more romantically inclined of her colleagues, which she does with good humour. More difficult to cope with is the misogynistic Katsumata, an officer of the same rank who is openly abusive and takes every opportunity to undermine her.

From an outsider’s perspective, much about Japan is difficult to fathom. The author describes the rigidity of the nine level of hierarchy in the police, the obligatory bowing that governs social intercourse and the artificial politeness which characterises interactions. This all seems hard to reconcile with the instant transformation to rage and unforgivable behaviour when the gloves are off, although perhaps one is a necessary protection from the other.

The appeal of a bloody death is possibly less easy to explain, and the graphic depictions of torture and murder which contributed to the book’s success in Japan will possibly appeal to a more limited readership in the West. Having said that, the popularity of Hannibal Lecter maybe suggests there are plenty of fans out there who might enjoy this.