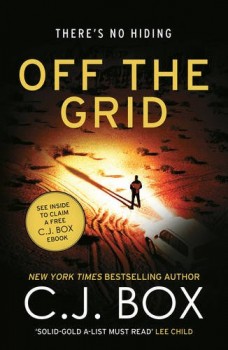 Middle-East veteran Nate Romanowski ran foul of a few government agencies in a previous adventure, and is hiding out in rural Wyoming with his falcons. His girlfriend’s contact with a sick mother is, however, all it takes to reveal his whereabouts, and before long two agents arrive with a choice: accept a special mission or spend years in prison.

The State Governor gets a hint of the above, and of Nate’s destination: the Red Desert, a dry upland in the northern part of the state. He asks Joe to take a look around and report back. Game Warden Pickett is a good friend of Nate’s, but hasn’t seen him for a while, and is not averse to a trip. He even has a good excuse: a 550 pound grizzly bear recently killed a hunter, and is moving in that direction.

The focus of all the interest is a deserted desert farmhouse, where ‘Ibby’, son of an ambassador from ‘The Kingdom’ in the Middle East has been acquiring materials, and with the help of volunteer college students planning a blow for freedom. His purpose is peaceful, but he has recently been joined by countrymen, headed by the evil Saeed, who have much more sinister intentions. As the plot comes to a head, Nate and Joe are at the sharp end, and need to battle against significant odds to survive unscathed.

I think this counts as the 16th Joe Pickett novel, and like Box’s other work reflects his enthusiasms: the wild animals that make the inhospitable uplands of Wyoming their home, hawking and falcons especially, and guns. Much of this is interesting if only because on these subjects Box clearly knows what he is talking about, and his love of the desert comes through.

Unfortunately, the plot is less convincing. Nate is given his ultimatum by two representatives of the ‘Wolverines’, a secret cabal within national security agencies, who name themselves ‘after that band of rebels in the movie Red Dawn.’ It later becomes evident that Homeland Security know plenty about Ibby and his plans, and the reason for sending Nate in is unclear. The final confrontation seems entirely engineered to provide a suitable finale.

There is not too much subtlety in the political area either. Ibby and his friends have legitimate concerns about Government monitoring of private communications; Saeed and his men are evil stereotypes for whom death with Nate’s oversized handguns is no more than they deserve. Federal Government is shifty and not to be trusted; a man can put more reliance in his personal weapons. Such attitudes may play better in central US where the issues apparently seem clear-cut.