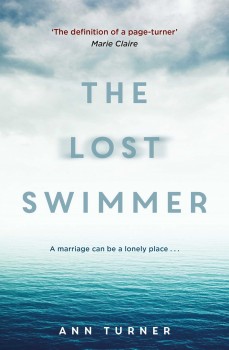 Rebecca Wilding, an Aussie archaeology professor, is accused of fraud. And then her husband goes missing …

Rebecca Wilding is an Aussie archaeology professor with a good reputation for her research. But her life starts to crumble when she is accused of serious fraud – and she is convinced her husband Stephen is having an affair.

Rebecca is due to present at a conference, so grabs the opportunity to try to allay her fears. She and Stephen head off to Greece, Italy and France. But Stephen goes swimming off the Amalfi coast and disappears. Rebecca is frantic, especially given the memories this sparks off of her father drowning. Cue Keystone Cops around Europe.

In the end, The Lost Swimmer turns into a ‘so what?’ of a novel, mainly because Ann Turner doesn’t make us care enough about the characters. Both Rebecca and Stephen are self-absorbed and irritable, and their one-dimensional grown-up children make little impression on proceedings, apart from a vague memory of whining (who said it’s the Poms who whinge?) The university mob merge into one, with the exception of moustache-twiddling Priscilla, who seems to have it in for Rebecca (you’d think she’d have to stand in line, given how annoying the woman is). And Turner seems to be aiming for the most off-beat sidekicks around, with an elderly woman and a bloke in a wheelchair to hand.

For a thriller, it’s curiously unthrilling. And it’s oddly structured as well, with the fraud angle featuring large at the start, a badly sagging middle and then Stephen disappearing about two-thirds of the way through (trust me, this is not a spoiler). The ending is brief, unsatisfactory, and redolent of ‘home in time for tea.’

Turner is sound on the pressures and paranoias of modern academia, but otherwise the book is heavy on sightseeing, and light on convincing characterisation and decent action. To be honest, it’s an anti-climax of a plod through pretty scenery.