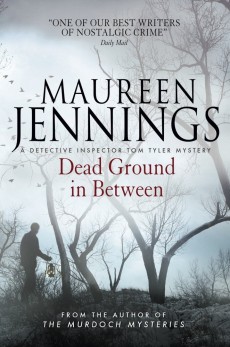 Dead Ground In Between

On a cold winter’s night in late 1942, an old farmer goes missing and is later discovered, stabbed, in a secret bunker. Detective Inspector Tom Tyler investigates.

Detective Inspector Tom Tyler has only recently been posted to Ludlow, and is still getting to know his new rural patch. It is 1942 and food is short, and production from this agricultural area is sustained with the help of girls from the Land Army and Italian prisoners of war. Rations are supplemented by rabbits poached by two local lads Wickers and Oldham, amongst others.

The police are called in to the Cartwright Farm when the elderly Jasper goes missing. His son John, John’s wife Susan, Susan’s son Ned, their Land Girl Edie and POW Angelo all deny having heard Jasper leave during the night, ill-clothed to face the winter weather. Late the next day, Jasper is found, dead from exposure and a stab wound.

To general consternation, the body was found in one of a number of subterranean hideouts prepared in secret to sustain the war against the Nazis in the event of invasion. Only a selected few identified as suitable for the campaign know of these bunkers, and Tyler is surprised that the body was found by 14-year-old Jan and Pim, ten, Dutch Jews fostered in UK. The cast are assembled; it only remains to discover whodunit.

This is the fourth in the series of Tom Tyler mysteries. Tyler is feeling lonely and missing his girlfriend Clare, two years away on secret activities overseas, although this doesn’t stop him looking upon the Dutch boys’ de-facto guardian Nuala with a favourable eye. He also has friendly and enthusiastic subordinates, including Sergeant Rowell, and Mortimer, a sharp woman constable.

No doubt the food rationing, the Victorian heating arrangements and the inconvenience of the transport facilities will bring back the general discomfort experienced by our forebears, at least to those over 60. Formality in communicating with others and respect for differences in class are also acknowledged.

In many ways, however, this does not feel like a realistic picture of the 1940s. There is the odd anachronism – the use of the word ‘stash’ for a hidden item, for example, is clearly out of place. And as for Rowell seeking his superior’s approval for a sexual liaison (a plot sideline), an easy conversation on such matters between policemen of different ranks, especially after contact of only a few weeks, strikes me as most unlikely.

Nonetheless, the characters are sympathetically drawn, the police bright and observant, and even those with something to hide have a back story. Even at the end some things remain forever a mystery, and to that extent at least the story could be said to reflect real life.