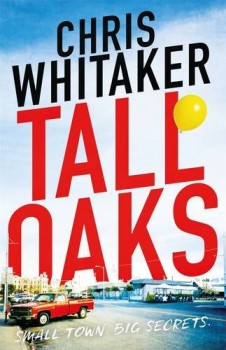 A small American town gains notoriety when three-year-old Harry is abducted. His mother Jess is devastated, but others have problems too.

The town of Tall Oaks is baking in the summer heat, a small group of families struggle with a range of problems. Most desperate is Jess, who lost first her husband Michael after he drifted away, and then her only child Harry one night to a nightmare clown figure who took the child from his bedroom. Jim, head of the local police, has made no headway and fights to contain his rage.

Jess’s mother Alison tries in vain to comfort her daughter, whose mental state is becoming increasingly unbalanced. Alison’s sister Henrietta and Roger, Hen’s husband, have serious issues and are of little assistance. Another resident Jerry, slow and overweight, runs a photo shop for minimal pay barely sufficient for his mother’s medications.

Elena struggles to bring up her weird teenager son Manny and three-year-old Thalia without the support of her husband, who has moved on. Manny has taken an interest in Furat, a girl from an Iraqi family who have moved in next door, and Eleana herself has a new boyfriend, Jared. Jared is handsome and personable, but for many years has been repeatedly relocating to escape some personal demons.

The above is not a complete list, and the somewhat dizzying rapidity with which one is introduced to the cast can be confusing, especially when the narrative moves quickly from one to another. Once the reader is able to consolidate, it is evident that these are not particularly exceptional people, but all wrestle with problems sufficient to make them sympathetic, and their lives are laid out well enough.

The author drops the occasional bombshell, however, that hints at a connection with Harry’s disappearance. Jess’ and Jim’s obsession with the crime is understandable. But what is the cold child-like figure that Hen has in her attic? What is the reason Jared is continuously moving on from place to place? And what secrets does Jerry have in the photographs stored in his filing cabinets?

Those who enjoy being introduced to a disparate bunch of small-town folk may find the book engrossing, especially if vicarious emotionality is your thing. Most of the characters are in a state of internal turmoil, several on the edge of raw grief, and one or two barely in control and liable to extreme reactions on the least provocation. Other readers may find themselves muttering instructions to get a grip and stop whinging.

I am pleased to say that the final section of the book satisfactorily resolves the many puzzles posed in the preceding part, and that several of the answers I did not see coming. It is all done very neatly, and I finished far happier with the book than I was when halfway through. It was just such hard work remembering who was who.