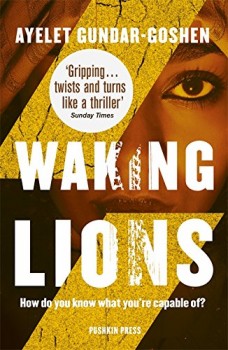 Driving in the desert late at night, Dr Eitan Green hits and kills Asum, an Eritrean immigrant. Asum’s wife Sirkit finds Eitan’s wallet at the scene and pressures him to make his medical skills available to those in need.

Dr Eitan Green lives in Beersheba, bordering the desert in Southern Israel, with his police detective wife Liat and their two small children. Letting off steam in the desert one night, he runs a man down and decides not to report it. However, Sirkit, the wife of Asum, the Eritrean immigrant killed in the hit and run finds Eitan’s wallet by the body, and this gives her a lever.

Sirkit demands that Eitan use his medical skills to help other illegal immigrants, mainly from Somalia and Ethiopia, at a garage in the desert. Driven by guilt and the threat of prosecution if Sirkit tells police of the accident, Eitan turns up every night to treat a long line of illnesses and wounds. But Liat knows something is going on, and Sirkit is not the philanthropist Eitan initially imagines her to be.

This is an impressive book in several dimensions. Criminal activity is involved, and this develops through the book, with a series of exposures which shed a changing light on the motivations of the participants. At the same time the internal dialogue from the main actors – Eitan, Liat and Sirkit - provides a powerful and convincing commentary on how people react under stress.

Eitan and his family ended up in Beersheba only because of his unwillingness to countenance financial irregularities at a better-located hospital in central Israel, yet after a momentary lapse of concentration finds himself liable to imprisonment, stealing drugs from his clinic and lying to his wife and his colleagues. His former close family life is shattered, but his hatred and mistrust of Sirkit is matched with what becomes admiration, and then desire.

Liat is assigned to investigate Asum’s death and becomes determined to pursue the case when her superior makes it clear that the death of an illegal immigrant is of minimal priority. The pressure she places on a potential witness eventually results in another death. The author explores Liat’s confusion about Eitan’s sudden refusal to talk about what is going on in his life, her suspicions and her refusal to ask him, or herself, the questions which might bring answers too terrible to contemplate.

Sirkit’s thinking becomes fully exposed only towards the end of the book, when we find out the true nature of the relationship between herself and Asum, what Asum was up to, and Sirkit’s hard life. These revelations help to explain her strong character and the element of ruthlessness which sustains her.

This is psychologist Ayelet Gundar-Goshen’s second novel. A thriller which is literary, intelligent, thought-provoking as well as a great crime story makes this one of the best books to cross my desk for some time.