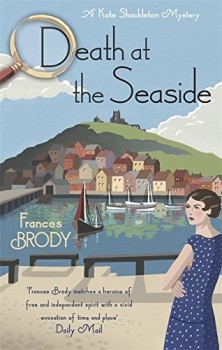 Death at the Seaside

War widow turned private investigator Kate Shackleton takes an overdue holiday to visit an old school friend and her goddaughter and discovers a body – and a wall of silence.

Whitby is an ideal setting for a murder mystery. Birthplace of Bram Stoker’s Dracula, an ancient town surpassed by its north Yorkshire neighbours, secluded, surrounded by cliffs, and its ruined abbey perched atop a stiff climb, it’s atmospheric enough to believe almost anything could happen there.

Frances Brody uses the town as the background for the eighth adventure of her war widow turned private investigator Kate Shackleton and, as always, captures it with well researched historical details and some charming descriptive writing. Kate is taking a break in the town where she got engaged to spend time with her schoolfriend, Alma Turner and goddaughter, Felicity.

Nostalgically looking in the window of the shop where she and her late husband bought both engagement and wedding rings, Kate spots a perfect present for Felicity – and stumbles into a murder when she finds the owner lying dead. At the same time Felicity has gone missing.  Kate finds herself drawn into the investigation by the desire to protect her friends, keep secrets and her attraction to Marcus Charles, the Scotland Yard detective she has worked with before, who has been assigned to the case.

Kate is a professional, an ex-VAD, those mainly upper-class girls who forced their way to the Western Front to become nurses under most appalling conditions, a clever and determined member of a group matured by experience and with little room for frivolity in their lives.
Loyalty to the impractical Alma, a fortune teller, spiritualist and a possible suspect due to her relationship with the dead man, pushes her to investigate and eventually call on the skills of her team of Jim Sykes and Mrs Sugden.

This is a straightforward whodunit set in the 1920s. The stigmas of illegitimacy and bigamy play their part as does smuggling in a small town which once relied on fishing and is now facing the run-up to the Depression as best it can. There are enough twists, red herrings and scandal as Kate slowly unpicks a series of mysteries which will lead her to the killer.

It’s a lightweight, entertaining tale with a likeable protagonist. If the intelligent, resilient, and persevering Kate seems a little weary of her role at times and the way she is often under-appreciated by others makes her more endearing and amiable.

Running parallel to the main story is that of Felicity. Her brief appearances and her search for her absent father are short, but create real mystery and suspense and some of the settings, Brody’s favoured Holy Island with its shifting sands and tidal waters features yet again as a path to danger.

This is a charming read with some gentle humour and soft smiles, a serious crime, a real investigation, and a well-constructed mystery. Kate, a capable and self-reliant woman in a society which regards her as a second-class citizen, makes her case with quiet authority. It is well written, engaging, easy to read and positively full of the atmosphere of its setting and time. Alma’s fortune-telling offers an intriguing plot device and adds a level of suspense to a story which could be classified as a ‘cosy’, but is far too good and far too clever to be dismissed with that faint praise.