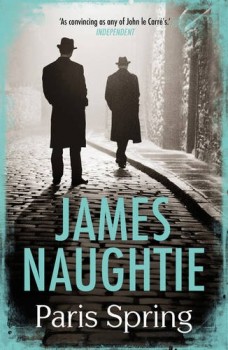 Will Flemyng of the British Secret Service is on his way to the embassy in Paris when a young unknown man speaks to him quite out of the blue and sets in motion a series of events that threaten to lead to his ruin and exposure.

When Will Flemyng is approached by a young man on the Paris metro he realizes that he has been ‘picked up’ and feels obliged to meet him again. When he does so he is quick to understand from their conversation that his brother, Abel, an American secret service agent, is being threatened with exposure. Normally he would immediately report the details of any such encounter to his boss and mentor, Freddie Clayton. On this occasion, however, he decides that the threat is a personal one which he prefers to handle himself. Clayton is very experienced in such matters and, though he does not press the matter any further, he realises from Flemyng’s account of the conversation that he is not being told the whole truth.

Flemyng meets with this young man, who says his name is Kristof, on more than one occasion, but each time the information gleaned is less than illuminating. Apart from emphasizing that he wants something from Flemyng, Kristof is not particularly forthcoming, although he does insist that his threat is real. Certainly, Flemyng believes that he is being blackmailed. The reader is under the impression that something startling is bound to happen as a result of this relationship.  Unfortunately, when the truth of the situation is known, it is quite disappointing. It is difficult to see why this story of the younger brother, the elder brother, Mungo, and their home in Scotland is given such prominence. One suspects that at least part of the reason is the author’s familiarity with the Scottish Highlands.

A similar criticism can be made of some of the characters. London-based spies are introduced, presumably to add realism to the portrait of a foreign embassy, but they have little or no function in the novel and fail to add anything to it. The author goes to great pains, for example, to compare the careers of Will Flemyng and Pierce Bridger, the Head of Chancery, but we learn little of Bridger except that he had wanted to follow the same career path as Flemyng, but had been turned down. We are looking for the rivalry between the two to show itself but in the end he seems simply to disappear from the novel without trace. The only totally convincing – and most sympathetic – character is Freddie Clayton, the experienced and shrewd, but kindly station chief who has not long to live. Grace Quincey, the fearless and determined reporter, is also interesting and has a large part to play in the action even when she is no longer on the scene. Those two apart, the characters are fairly colourless.

This book is set during the spring of 1968 – a period of civil unrest in France, during which there were street demonstrations, widespread strikes, and the occupation of universities and work places. From the title it might be assumed that these events were to play a significant part in the novel, but, whilst there are references to them, they are almost incidental. There is an unconvincing attempt to link them to political disturbances in Hungary, Czechoslovakia and Poland and thus to the Cold War, but the story is more about individuals than politics. Another slightly disappointing feature of this novel is that, although there is a lot of detail given about local journeys and names of Paris streets, we never feel that we are actually in Paris.

It has to be said that a thriller, whatever other qualities it may have, has to thrill – something that this book singularly fails to do.