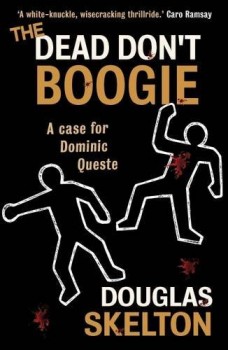 Glasgow investigator Dominic Queste is hired to find Jenny Deavers.  Jenny doesn’t want to be found by Dominic or by others looking for her.

Glasgow investigator Dominic Queste is hired by Jenny Deaver’s Aunt Jessica to find her, but Jenny is not happy about being discovered. However, when Kingsley appears, a drug dealer ex-boyfriend who claims Jenny relieved him of coke and cash, Queste manages to persuade her to stay with friends of his, tough Geordie brothers the Sutherlands, for temporary protection.

Returning to Aunt Jessica for further instructions, he finds the lady dead. Tiger, employee of local gangleader Freddie Frazer, is lurking on the premises, but makes off. Queste calls the police, who give every sign of believing that Queste is up to something. This may be partly due to Queste’s history as a cocaine addict, and as a journalist whose stories were less than wholly supportive of the Glasgow police.

Frazer soon makes further attempts to prise Jenny from the hands of the Sutherlands and other friends of Queste who are trying to protect her. It turns out that there are several parties keen to find Jenny, all with hostile intent. If Queste is to protect Jenny, and avoid the unfriendly attention of DCI Cornwell, he needs to find out what is going on, and fast.

Dominic Queste is a private eye in a rather traditional mode, with a dodgy history and a capability for a few smart tricks but a strong moral sense. He has plenty of friends on the fringe of the law, although most are now reformed. What really makes the character, however, is Queste’s continuous stream of references to contemporary TV, film, books and music. Knowing and humorous, these carry the story along.

Enough is said about the Glasgow setting to make it clear that the author has some affection for the place, and Queste frequently throws in explanations of local names. No attempt is made to reproduce the local dialect. While this is probably just as well given that even the most skilled attempts inevitably complicate reading for outsiders, it was difficult to escape the feeling that the conversation appearing on the page was a pale version of what such characters would have spoken in real life.

Such quibbles are easily overlooked however, when the book has such a fast pace and plenty going on. Queste and his pals face a range of villains and the body count escalates as the hero of the tale gets close to finding the answers he seeks. The mainspring driving all this violence, a mixture of political ambition and murky family secrets, only becomes clear in the final pages. For all that, this is a light-hearted tale with Queste’s witty comments as a permanent satirical counterpoint to dark doings.