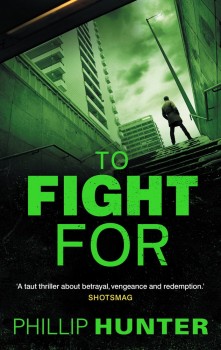 Former Para and bare knuckle fighter turned-assassin Joe seeks vengeance on those who killed the woman he loved.

Hard-boiled is hardly an adequate description of Phillip Hunter’s third book in the series featuring Joe, the ex-Para and bare-knuckle fighter, turned gangland killer. This is not just gritty crime fiction – more an improbable black mountain of violence, obsession and revenge to turn all but the strongest stomachs.

Violence is all Joe knows. Clearly suffering PTSD from his experiences in 3 Para’s bloody hand-to-hand night battle for Mount Longdon during the Falklands campaign and further affected by the beatings around the head he has taken in illegal club fights, he does eventually achieve a measure of redemption, but this is almost incidental to the brutal action which has gone before.

In this totally impossible, wide screen 3D explosion of a story, a turf war is raging among the gangs for control of East London. Joe has no choice but to join the fight. It’s the only way he can find out what happened to the woman he loved – and extract his own brutal vengeance on her killers. Bent police, dodgy security service involvement, gun battles on the streets, are all par for the course. The line between the good and bad guys is blurred and constantly shifting. Who can be trusted?

Joe seeks revenge at any cost, including his own life. He is beaten, stabbed, run down, shot at – and somehow survives, fuelled by hate and patched up by a drunken, struck-off doctor. He would hardly be your first choice to share a pint with. But he is a surprisingly easy character to admire, never swerving from his adherence to his own code of honour. He will maim, torture or kill to gain the information he requires, but is unflinchingly loyal to his friends. The near non-stop action is very real, if you can believe it. The story pulls no punches either in its descriptions of brutality or the language used. Readers who dislike expletives may find this is not the book for them.

Despite Joe’s apparent invulnerability and his capacity to absorb the most appalling physical punishment, more thoughtful readers will recognise his pain, his flashbacks, his fear of losing connection with the one good thing in his life and the desperate need, in his own eyes, to right wrongs. That, in my view, saves this from being just another catalogue of cheap brutality and makes it a compelling, if not wholly convincing, read.