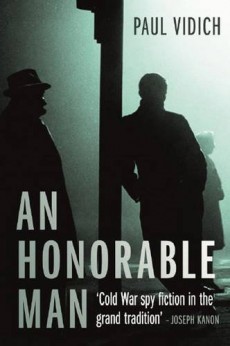 CIA agent George Mueller is given the task of unmasking a communist mole in the organisation.

Washington D.C. 1953 and CIA agent George Mueller reluctantly accepts the task of unmasking a communist mole, codename Protocol. The plot is set during the increasing Cold War between the USA and Soviet Union and at a time when communist paranoia was rife in the States. Based around the conventional theme of East versus West spies trying to outwit each other the story is efficient and textured enough to raise the novel above many of its type.

The title sounds like it should be one of Le Carre’s and some of the plot lines here are reminiscent of Smiley’s assignments but transferred to the US, so comparison with his spy stories is inevitable and could lead to the opinion that it is formulaic. The title is a reference to Mark Anthony’s speech spoken over the murdered body of Julius Caesar in which he describes the assassins as honourable men.

Agent Mueller is a complicated character – trusted but with secrets of his own that both drive and hinder his work and defines his personality. Paul Vidich also brings insights into his other characters too – the Director of the CIA for example suffers from gout and wears slippers when he is in the office. Nice touch.

The underlying and influencing threads contained in this believable story are that of the McCarthy witch-hunts rooting out those Americans suspected of being communist sympathisers together with a society dogged by widespread homophobia. Maybe there could have been room for more about these issues to add further context and depth to the story and underline the fears experienced by the characters. As well as saying a lot about America at this period of its history it also tells us something about being a spy; which is that you should trust no one, but also expect no one to trust you.

This is assured storytelling with a manageable and convincing cast of characters. It has all the hallmarks of a quality spy novel with appropriate measures of action and circumspection. This debut novel by short-story writer Vidich will be right up your street if you like Le Carre, Joseph Kanon and Alan Furst.