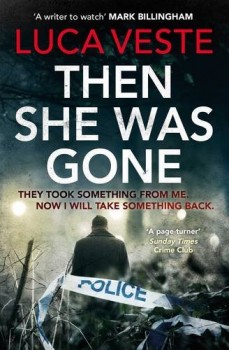 Then She Was Gone

When DI Murphy and DS Rossi arrive at the scene of a brutal murder, they have no idea the slaying is connected to the disappearance of a baby girl a year before.

At first, this is nothing more than a missing person case with a little twist. Sam Byrne is the son of a retired MP, and himself the prospective Conservative candidate for Liverpool. His parents want his absence kept under wraps, which is not the only thing off kilter in the detectives’ opinions. His house feels like an unlived-in show-home, his team is clearly hiding something, and there is obviously more to Sam Byrne than meets the eye.

When they find him, dead in a rented flat, the truth beings to unfold. The young man, far from being innocent, had left a plethora of his own tortured victims in his wake. But what is his connection to a missing child, a man in prison, and a rising body count?

It is refreshing to read a UK crime story that isn’t based in London. Veste leads us through the streets of Liverpool with enough care to remind the reader of his setting, whilst not getting bogged down in description. His treatment of the not-too stereotypical detectives is treated with equal attention. DI David Murphy is a happily married man, and DS Laura Rossi, although with boyfriend issues, comes across as straightforward. Their private lives simply add a little colour to the story; the stuff of a good solid detective series.

Written mostly in the third person, the story moves at a sharp pace, hopping between the present and the past. However, there are chapters devoted to the murderer, and these are written in the second person point of view. I found this at best gimmicky, at worst disjointed and intrusive. I understand why the author used ‘you’ in these chapters, but there are better ways of hiding the criminal’s identity.

I would also nit-pick and say that given the evidence the detectives had to deal with, they could have sniffed along the right scent sooner. But then the murderer would not have had the time to kill off so many people.

Sam Byrne’s shocking past, and the raison d’etre for his murder is dark, unusual and plausible. However, its continuing influence on others following in his footsteps seems less believable, but does make for a dramatic ending.

That said, Luca Veste has talent for exposing the ugliness of the criminal mind, and he has a thoroughly good voice. I hope this is not a one-off, but a taste of things to come. For readers in search of disturbing and dark, you have come to the right place.