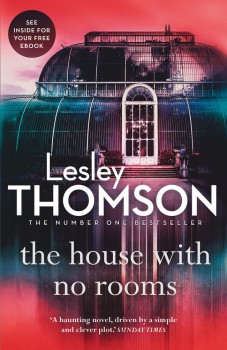 The House With No Rooms

A chilling case for detective’s daughter, Stella Darnell, as crimes of the past echo in the present.

This is the fifth book in the Detective’s Daughter series, but it reads perfectly well as a standalone. Most of the action centres on the Botanical Gardens at Kew. Amateur detective partnership Stella Darnell and Jack Harmon, plus assorted colleagues and friends, find themselves involved in trying to solve decades old and present day murders.

Darnell, whose late father was a police detective, runs a successful cleaning business in London and Harmon is a train driver for London Underground. They need to apply their different skills and knowledge to solve crimes committed in 1956, 1976 and 2014 that could all be linked. The mystery starts for them when Stella is cleaning at Kew and stumbles over the dead body of a man.

All the characters and their relationships with each other are totally believable and intriguing. This is one of the book’s many strengths in that they have been carefully developed and shaped to become natural and real. Stella has learned a lot from her father and still feels his influence. She also puts her clean and tidy traits to good use during investigations. Jack, who prefers night-time to daylight hours, believes he can instinctively sense the presence of a potential murderer, or True Host as he thinks of them, and identifies their looks and habits before keeping them under observation. Both are pragmatic and thoughtful in their approach to solving crime, but this doesn’t mean they always get it right.

Lesley Thomson provides an entertaining reading experience. The plot is absorbing as the suspense gradually builds and the mystery deepens. The twists, turns and revelations of clues and links are deftly handled into an exciting tale. Her use of a cleaning detective and a side-kick with such percipience is inspired. This is a satisfying story in which you also learn a bit about botany and get advice on cleaning.